At The North Grove, all roads lead back to food

Over nearly three decades and two names, The North Grove has come to view food security as the key to community resilience
Jun 7, 2021 12:45 PM By: Kieran Delamont 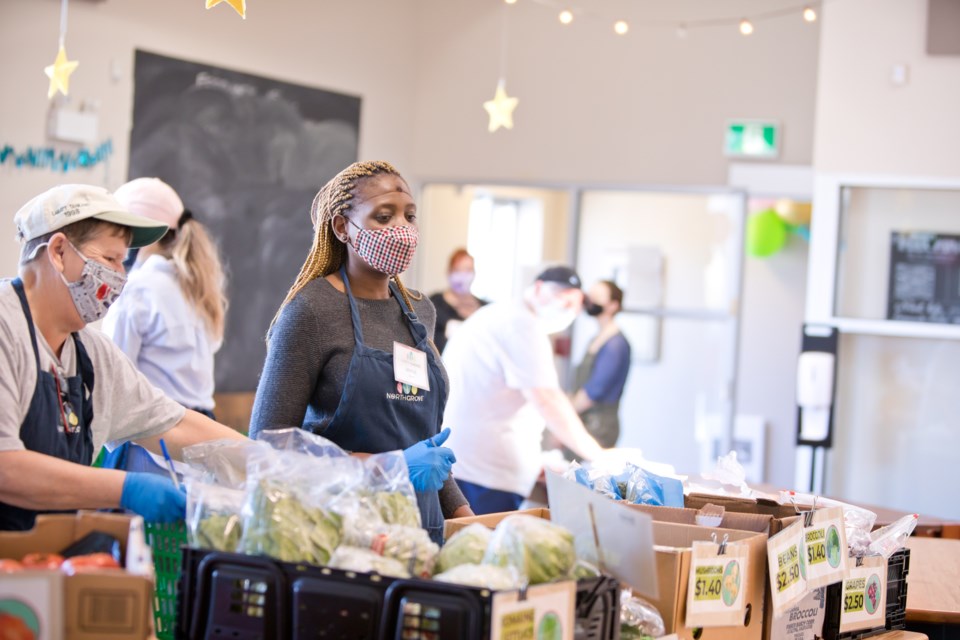 The team at The North Grove, at their affordable market in mid-April. Snickerdoodle Photography.

Twenty-seven years ago, the North Grove was called the Dartmouth Family Centre, their programming centred around supporting parents and young children, in a neighbourhood with a lot of single parents and where social isolation has been flagged as a community issue.

“A lot of what we do is about bringing people together,” says director Wendy Fraser. There was support for child development, or healthy play programming, or skills classes. “Sometimes they were just about giving parents a break,” she adds.

That kicked off a longer process that led the Dartmouth Family Centre to gradually evolve into The North Grove and open their Community Food Centre program. The organization homed in on the focus that would best click with what the community needed.

“It led us to connecting with Community Food Centres Canada,” who has a “really robust program that is really different from a food bank,” Fraser says. “It’s about, how do we bring community together around food?”

Look no further for a concise explanation for what The North Grove considers its mission, the anchor around which its programming revolves.

“We teach them how to cook guacamole, and then we give them all the ingredients,” Fraser says. Twice a week (in normal, non-pandemic times) they run two big free community meals every week, a family dinner on Monday nights and a community lunch on Wednesdays.

“It’s like a big giant restaurant — people can come and have a meal and connect and socialize. Some people are just coming for the meal, while others are in the kitchen with neighbours and friends actually making the meal.” On top of that, they run an affordable market where on top of affordable produce, they give away what they grow through their community farm program.

COVID has naturally changed what they are able to do, but the pandemic has also put an immense spotlight on the inconsistencies in food security. And it meant that The North Grove had an obvious role to play in holding things down over the last year and a half.

“We pivoted incredibly quickly. Whatever the date [of the initial lockdown] was, one week later we re-opened as a food distribution site,” Fraser says. And from that, she says, “a few cool things happened: we started making full meals and setting up a delivery system. We went up to two meals a week — full, hearty, protein-rich meals.” And a lot of them, too: Fraser says they’d served up more than 32,000 meals since the pandemic began.

“It meant that people knew there were two meals, that could probably be stretched to four, that they could get from us every week,” Fraser says.

The end of the acute phase of the pandemic seems now in sight, but that hardly means an end to the needs they’re meeting.

Social isolation has been a brutal 18-month long norm, but it is not something that will just fix itself, any more than the opening of restaurants and retail will do anything to solve the problem of hidden hunger.

The questions they are asking themselves now centre on how opening up and solving those problems can go hand in hand.

“We are chomping at the bit to be open again,” Fraser says. “How do we knit more programming that’s about both food and family?”

However, it would be a mistake to think of The North Grove as a reactive organization that exists only to respond to social problems and deliver social services. Fraser's excitement to open back up is not only an eagerness to help, but also a desire to continue proactively building the community they have started to establish.

“We want to get back to where we were,” she says. “In the last little while, when we’d started to open up again, the laughter and the happiness coming out of that room was amazing.”

NOTE: This is a corrected story. The original had the wrong last name for The North Grove's director.

On the front lines of the other epidemic, Mainline Needle Exchange starts its 30th year
May 3, 2021 1:44 PM