'He just sits at the table and comes up with crazy ideas': Art maze creators working on new attraction

They certainly don't do anything too quickly, but the creators of the BernArt Maze are hard at work on another multi-year art project
Apr 21, 2021 12:30 PM By: Kieran Delamont 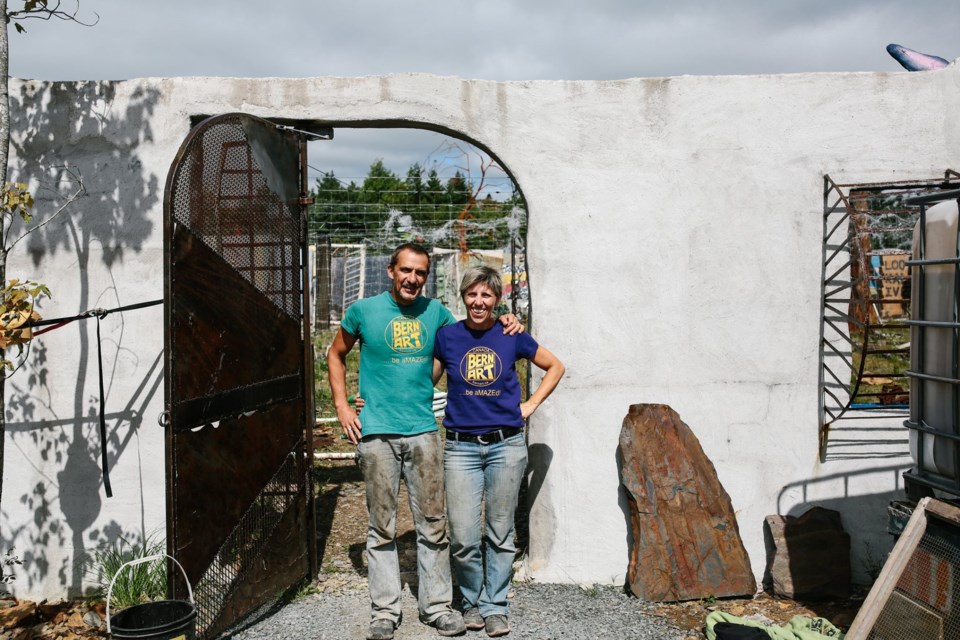 It might not always be obvious what is being built at the home of Nicole and Bernd Krebes, but you can bet the farm that the pair has something on the go.

The artistic force that manifested the BernArt Maze, a constantly accumulating curation of what others might see as junk off the side of Highway 103 (but which is actually a meticulously crafted art maze off the side of Highway 103 that opened to the public in 2018), are now hard at work on a companion project — their Enchanted Forest, set to transform the forest next to the maze.

“We wanted to do another project, and we had some wooded area next to the BernArt Maze, and we decided we wanted to turn it into an enchanted forest,” says Nicole Krebes. Their hope is that it will be a bit of a change of pace from the maze — a place where folks can "bring a picnic, and spend some time in the forest.”

Like the maze, which was under construction for the better part of six years, the Enchanted Forest is going to be an endurance project — a little bit of work here, a little there, until the whole thing looks like Bernd’s vision.

They’re able to use an existing path that meanders through the wooded area, and are building a wall of lobster traps to set it off. Also, like the maze, much of it is going to be built out of found and repurposed materials.

“Fisherman from all over Nova Scotia have been donating us their lobster traps,” Krebes notes.

Since they started on the art maze in 2012, the pair have enjoyed the support of artists around the globe who have donated materials, time and labour to the project, like an unofficial studio for artistic people the world over.

“We started way back in 2012 building the maze, and we had people from all over the world, almost 100 artists and young people, helping out,” Krebes says. “A lot of them are interested in art — maybe not necessarily making art, but [Bernd] trains them to work with our materials, mainly concrete and metal.

“Everybody normally has a good time,” she adds. “I’ve heard them say it’s like summer camp for adults.”

The COVID-19 pandemic threatened to cancel both their 2020 season, with the maze and their work on the Enchanted Forest.

“It all got set back a little, but hopefully this summer we’ll make headway again,” Krebes says. “Hopefully in the next three or four years we’ll open up.”

But the maze proved too popular to keep closed during last year’s COVID summer, when outdoor activities just like that were suddenly premium events.

“At first we thought, ‘should we even open?’” recalls Krebes. “People were actually encouraging us, saying ‘we need a safe space outdoors where we can bring the family.’ We opened, and we were really surprised — we had people from Cape Breton, all the way down to Yarmouth. … It was a really positive experience, during this whole serious COVID phase.”

They’re set to host visitors again this year, with a planned launch on Canada Day. Krebes said that the reputation of the maze has only grown since it opened in 2018.

“It seems like the word is spreading,” she says; this year, they’ve added more outdoor activities like games and seating, to their outdoor courtyard — more ways for people to enjoy themselves while still staying distant.

Another safe bet is that even if you’ve been to the maze before, there’s likely to be something new for you to see and do on the property — whether that’s a new installation, new art, or just new additions, all of them borne from the same artistic passion shared by Nicole and Bernd Krebes.

“It’s a never-ending project,” Krebes says, laughing. “He just sits at the table and comes up with crazy ideas.” And we’re all the better for it.

After last year's lighthouse tour, Datsun (and his owner) are visiting all of Nova Scotia's breweries
May 19, 2021 1:44 PM
Comments