The panel says it expects the administration of second doses won't end up taking as long as four months based on Canada's expected vaccine supply
Apr 7, 2021 3:41 PM By: Canadian Press 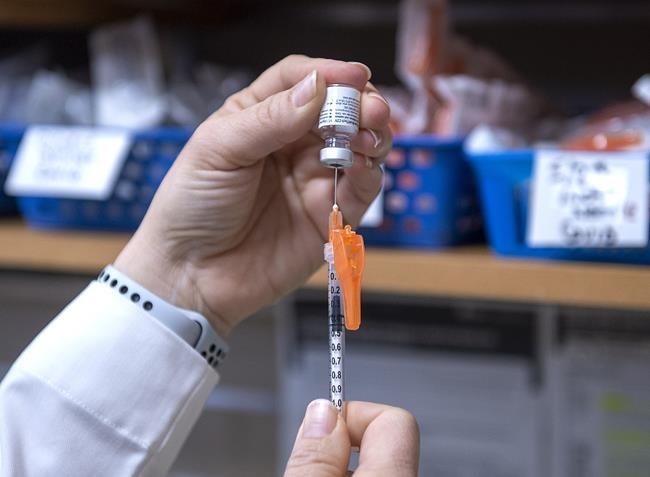 OTTAWA — The National Advisory Committee on Immunization says it is standing by its emergency recommendation to extend the delivery of second doses of COVID-19 vaccines up to four months.

NACI's experts issued a recommendation in early March to extend the dosing interval from three or four weeks to as long as 16 weeks, because vaccine supplies were limited and they felt getting some protection to more people faster was needed.

Its followup recommendation, based on further study of vaccine, NACI says they still believe that to be the case.

"This helps to provide direct protection to the individual and those around them and may also help to prevent spread in the community," said the report released Wednesday.

The panel says it expects the administration of second doses won't end up taking as long as four months based on Canada's expected vaccine supply.

The recommendation came just as regulators in Europe and the United Kingdom updated their analysis of the threat the Oxford-AstraZeneca vaccine poses from blood clots.

The European Medicines Agency says it has enough evidence to believe some types of blood clots are a rare side-effect of the vaccine in a very small number of people, but they still believe the vaccine's benefits outweigh those risks because the threat from COVID-19 is even greater.

"COVID-19 is a very serious disease with high hospitalization and death rates and every day COVID is still causing thousands of deaths across the EU," said EMA executive director Emer Cooke.

"This vaccine has proven to be highly effective, it prevents severe disease and hospitalization and it is saving lives."

They do not know yet specifically what is causing the problem.

The EMA is adding blood clots as a rare side-effect from the vaccine to the label, but is not advising that the vaccine be withheld from any specific group.

While most of the cases have been seen in women under the age of 60, she says there have been clots in people of both genders and across all age groups.

Canada stopped using the AstraZeneca vaccine on people under the age of 55 pending further study of the vaccine. It is not known yet whether that recommendation will change.

This report by The Canadian Press was first published April 7, 2021.