Trudeau promises to speed $2.2 billion in funding for strapped cities 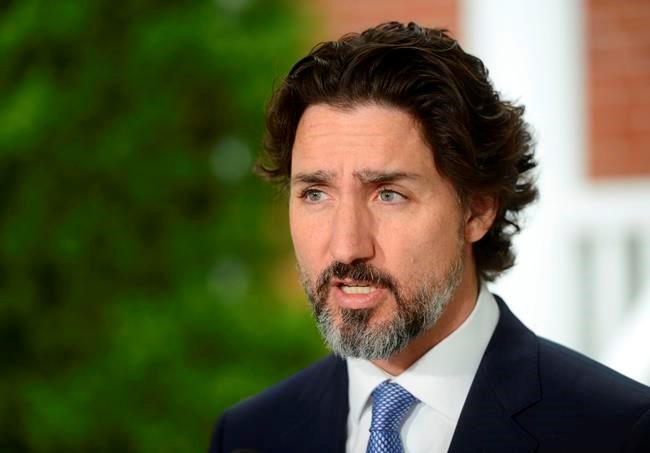 OTTAWA — The federal government is rushing out $2.2 billion in anticipated infrastructure funding to Canada's cities and while municipal leaders say it might help with a short-term cash crunch, it is not enough to fill the budget hole COVID-19 created.

Normally, the funding that comes through the federal gas-tax fund is split between a summer payment and a second instalment later in the year, but the Liberals plan to send the money in one shot this month.

Speaking outside his Ottawa residence Monday, Prime Minister Justin Trudeau said municipalities can use the money to meet local infrastructure needs and put people to work.

Municipalities have seen steep losses in revenues throughout the pandemic, as fewer people pay for transit or parking, and recreation centres stay closed without paid programming.

The $2.2 billion is much less than municipalities say they need. It also cannot be used for the shortfall in city operating budgets. Toronto says it's facing a $1.5-billion shortfall this fiscal year and will need to slash services.

The Federation of Canadian Municipalities has estimated cities will need between $10 billion and $15 billion this year, depending on the severity and duration of the shutdown.

Its president, Bill Karsten, said in a statement that the "modest, preliminary measure" from the Liberals may help some cities with liquidity issues, but noted the $2.2 billion "is not new money," has already been accounted for in municipal budgets and doesn't address the stark choices local leaders face.

Trudeau called the fast-track spending a first step, adding that anything else would need to happen hand-in-hand with the provinces, which have jurisdiction over municipalities.

"There is a range of services offered by cities that are at danger of disappearing. That's why we're doing what we can unilaterally and advancing the money forward, but we need to work with the provinces on this."

The gas-tax fund is one of the few mechanisms the federal government has to flow money directly to cities instead of having to move it through provinces.

Last year, the Liberals unilaterally doubled the fund to $4.4 billion as an end-around on provinces they said were holding up project approvals and slowing down the oft-criticized flow of federal construction dollars.

Infrastructure Minister Catherine McKenna said the federal government needed to see municipalities go ahead with planned projects and called the decision "an example of how we see infrastructure is critical to the restart of the economy."

She spoke about the need to help with local transit to boost capacity as Canadians head back to work as businesses reopen.

Federal infrastructure spending is traditionally seen as a way to stimulate an economic recovery, but experts have noted the unique challenges this crisis has created. The Liberals have been told to put money into things like child care to help women who have been disproportionately affected by job losses.

"In my humble opinion as a taxpayer, stimulating sectors that have been most deeply affected by the COVID-19 might be a better way to stimulate the economy."

The Liberals say spending to date under their $186-billion infrastructure program has created some 52,000 projects, although Giroux said he only has information to account for about 33,000.

"I have faith they do exist, but I don't have proof that they exist," Giroux said last week.

Asked about the discrepancy on Monday, McKenna said the projects Giroux couldn't account for are funded through the gas-tax fund and the Canada Mortgage and Housing Corp.

Officials report one new case of COVID-19 Wednesday in New Brunswick
Jul 15, 2020 2:01 PM
Comments
We welcome your feedback and encourage you to share your thoughts. We ask that you be respectful of others and their points of view, refrain from personal attacks and stay on topic. To learn about our commenting policies and how we moderate, please read our Community Guidelines.