Those who choose AstraZeneca may get mRNA shot for second dose

Dr. Robert Strang says 'there's research going on about the ability to mix vaccine'
May 5, 2021 3:40 PM By: Meghan Groff 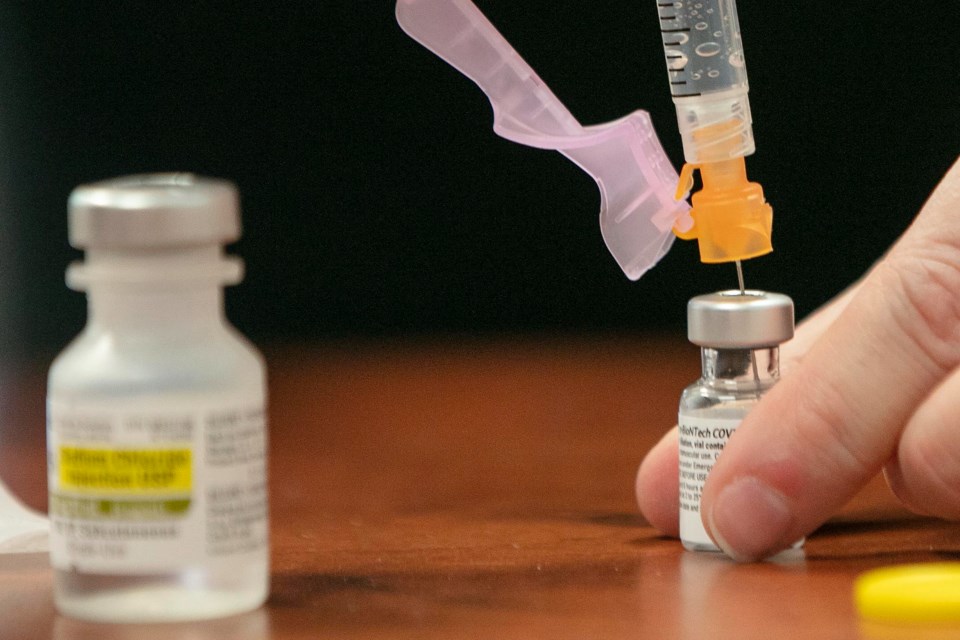 A nurse prepares a dose of COVID-19 vaccine to be administered today, Feb. 24, at the first clinic in a First Nation community in Nova ScotiaCommunications Nova Scotia

Nova Scotians who have chosen to get the AstraZeneca vaccine may get either a Pfizer or Moderna shot for their second dose.

"There's a line of thinking that it actually .... if their first dose is AstraZeneca, it may be preferable to give them an mRNA vaccine as their second dose."

The chief medical officer of health said it's an evolving science, but "everybody will be able to get their second dose with an appropriate vaccine."

The statement comes just days National Advisory Committee on Immunization (NACI) said the mRNA vaccines from Pfizer-BioNTech and Moderna are "preferred" because they don't carry the remote risk of a blood-clotting syndrome, which appeared to contradict Health Canada's long-standing recommendation that the best vaccine is the first one available.

Three deaths in Canada have been linked to vaccine-induced immune thrombotic thrombocytopenia or VITT.

The most recent case was in New Brunswick.

That province's chief medical officer of health, Dr. Jennifer Russell says the individual in their 60s received the vaccine in mid-April and developed symptoms a week later. She says the person was admitted to hospital and died two days later.

Russell told a news conference today the risk of complications from the vaccine remains very low, between one in 100,000 and one in 250,000 doses.

She said anyone getting the vaccine should monitor for adverse symptoms, including shortness of breath, chest pain, leg swelling, persistent abdominal pain, neurological symptoms such as severe and worsening persistent headaches or blurred vision and skin bruising or tiny blood spots under the skin beyond the site of the injection.

As of April 24, around 1.7 million doses of AstraZeneca had been giving out across the country.

NACI has said Canadians under 30 shouldn't be offered AstraZeneca or the newly approved one dose Johnson & Johnson -- also a viral vector vaccine that carries a remote blood clot risk.

Here in Nova Scotia, those between the ages of 40 and 64 are eligible to receive the AstraZeneca vaccine.

When the age bracket was expanded last week in our province to include those between 40 and 54, appointments were quickly snatched up.

Strang said all of the approved vaccines "are good vaccines," but NACI "is not overstating the facts."

"The reality is mRNA vaccines are better vaccines," he said. "We've always said Nova Scotians can have a choice."