The province's chief medical officer of health confirmed that some of the recent cases are linked to incoming temporary foreign workers
Apr 7, 2021 4:45 PM By: Meghan Groff 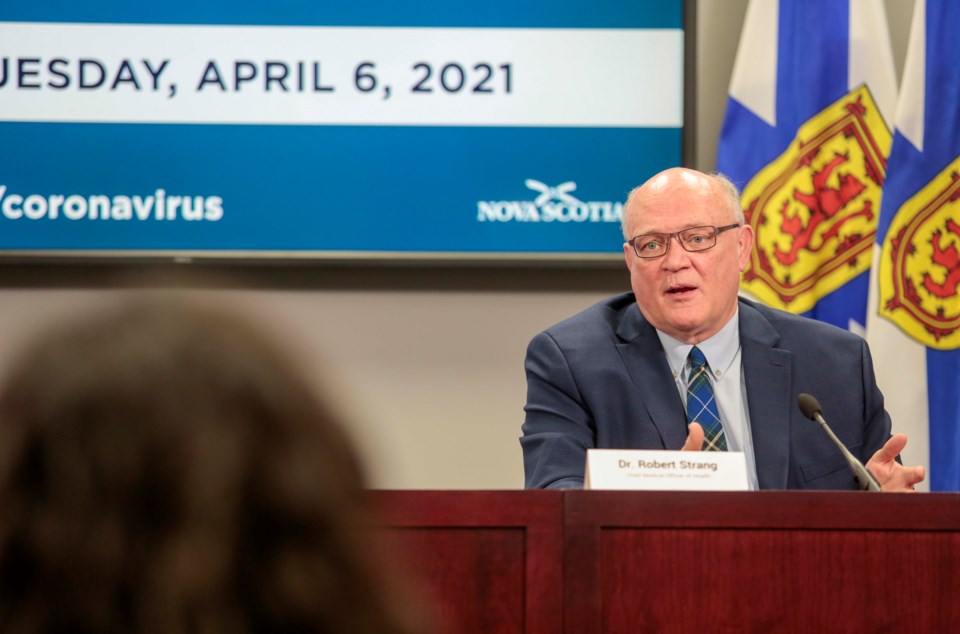 An increase in COVID-19 cases over the Easter long weekend "isn't news that anyone wants to hear," said the province's chief medical officer of health at a Tuesday briefing.

As of April 7, Nova Scotia has had 34 new COVID-19 cases since the start of the month.

In addition, on Tuesday it was announced another four variant cases had been identified in the province. In total, Nova Scotia has had 22 cases of the UK variant and 10 of the South African variant.

Dr. Robert Strang said while that's certainly a cause for concern, the good news is there's no sign of community spread at this time.

"Almost all of the cases we are seeing are travel-related or connected to a travel-related case," he explained. "Some people have to travel for their jobs, whether they're rotational workers, or temporary foreign workers or truck drivers moving essential goods."

"Quarantine, testing and other public health protocols for these groups and for regular travellers who choose to travel have helped minimize the possibility of community spread of COVID-19."

Strang confirmed that some of the recent cases are linked to incoming temporary foreign workers.

He called those employees "critical and essential" to Nova Scotia's agriculture and seafood sectors and said restrictions are in place to reduce the likelihood of the virus spreading to others if they test positive.

"All of the temporary foreign workers are now in single room occupancy in terms of their quarantine site."

Other travel-related COVID-19 cases have come from rotational workers.

A rotational worker is defined as someone with a set schedule of alternating between living here for no more than 4 weeks at a time and working outside the province. An example cited by the province is an Alberta oil worker.

Currently, rotational workers must be tested three times within two weeks of their return.

Those who work in Canada but outside the Atlantic provinces have a modified self-isolation, allowing them to visit outdoor public spaces as long as they wear a mask and physically distance themselves from those not in their households. They can also use a drive-thru, take advantage of non-contact pick-up to get items they've ordered and drop off/pick up household members at school, work and recreational activities.

The people living with rotational workers do not have to self-isolate as long as they don't have COVID-19 symptoms.

"We certainly recognize the importance of rotational workers and the imposition throughout the pandemic that they've had to follow, but also recognizing because of their regular travel back and forth, there is a substantive risk for bringing COVID into this province, something that we're very careful to protect against," Strang said. "And with the variants, that becomes even more of a concern."

In addition, not all travellers are required to self-isolate, so Strang said when public health officials issue a potential COVID-19 exposure advisory, that doesn't necessarily mean someone broke the rules.

"We have exempt travellers," he said. "We have truck drivers and other types of exempted travellers in specific occupations, military and other folks. The vast majority have to quarantine but not everybody."

Strang added conversations have started with officials at Halifax's airport to launch a testing program at that entry point. Temporary foreign workers already receive a rapid test when they land.

"We've agreed that we're going to start building capacity around testing and work off the logistics of the airport based on testing employees, then we could move that to start to do travellers," he explained.

However at this point, he said that likely won't lead to a reduction of Nova Scotia's mandated self-isolation period.

"Until we get much better science, it would be very risky to start to reduce the quarantine, especially for people who are not immunized, just based on testing results," he said.

"I've talked to [other] chief medical officers, we've all had cases of travellers who have tested negative on entry, tested negative maybe around day 8 ... then test positive on day 12, so there's still value on holding that 14 day quarantine and doing that late test."

Despite Nova Scotia's comparatively low COVID-19 caseload, Strang stated he's still "very nervous" about what the next couple of months could bring.

"As we get into summer, we can start to see, does this variant wave start to decrease? What is the impact as we get high levels of vaccination as we get into June," he said.

"We need to stay cautious, we need all Nova Scotians to follow the protocols while we get through April and May, and as we build high levels of immunity through vaccination."