Premier Iain Rankin confirmed that Nova Scotia would be adopting a 16-week interval between first and second shots as recommended by the national panel of vaccine experts
Mar 5, 2021 4:38 PM By: Canadian Press 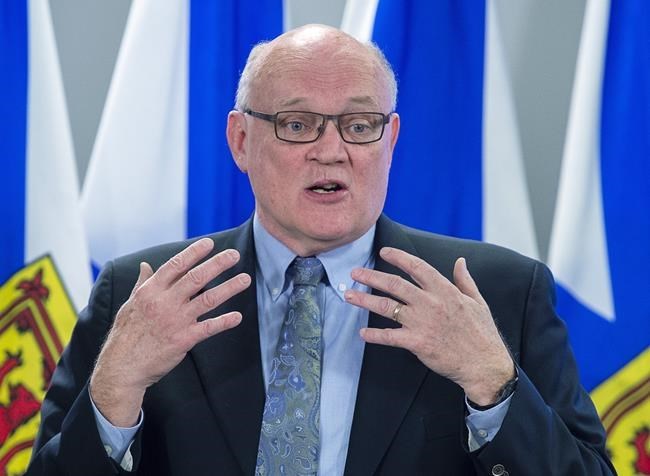 HALIFAX — Nova Scotia welcomed Ottawa's go-ahead for the Johnson & Johnson vaccine Friday as health officials geared up for the opening of the first of 10 community inoculation clinics across the province next week.

Rankin confirmed that Nova Scotia would be adopting a 16-week interval between first and second shots as recommended by the national panel of vaccine experts, meaning all Nova Scotians who want vaccine will get one shot by the end of June.

"We are committed to being ready to getting shots in arms when it is available," the premier said. He added the province's goal remains to achieve full immunity by this fall.

Keeping with its aged-based approach to vaccine distribution, Nova Scotia will open community clinics for those 80 and over in Halifax, New Minas, Sydney and Truro on Monday.

Frustrations mounted earlier this week when the province's appointment booking web page had to be temporarily taken off-line after traffic was double what had been anticipated. About 48,000 people aged 80 and over in the province are eligible to receive vaccinations.

Chief medical officer of health Dr. Robert Strang said booking for new appointments would resume online and by telephone on Monday for those who were born between Jan.1 and April 30. Those with later birthdays will be informed when they can register later this month.

"It is early days, and our supply is still limited, but we are on the cusp of rapidly expanding the volume of vaccine we'll get," Strang said.

Officials said they would also have more specific details next week on the rollout of the 13,000 doses the province is receiving of the recently approved Oxford-AstraZeneca vaccine.

The shipment must be used by April 2 and is targeted for those aged 50 to 64 years. It will be administered starting March 15 at 26 locations.

Health officials said that as of Thursday, they had administered 38,676 doses of COVID-19 vaccine, with 14,395 people having received a booster shot.

Meanwhile, the province reported two new cases of COVID-19 Monday in the Halifax area. Health officials said one case involved a close contact of a previously reported infection and the other was under investigation.

The province has 31 active reported cases of novel coronavirus.

This report by The Canadian Press was first published March 5, 2021.