Seventy-seven-year-old Ann Hicks and 85-year-old Audrey Wiseman were among the first residents at the Northwood facility to receive shots of the Moderna vaccine today
Jan 11, 2021 12:44 PM By: Canadian Press 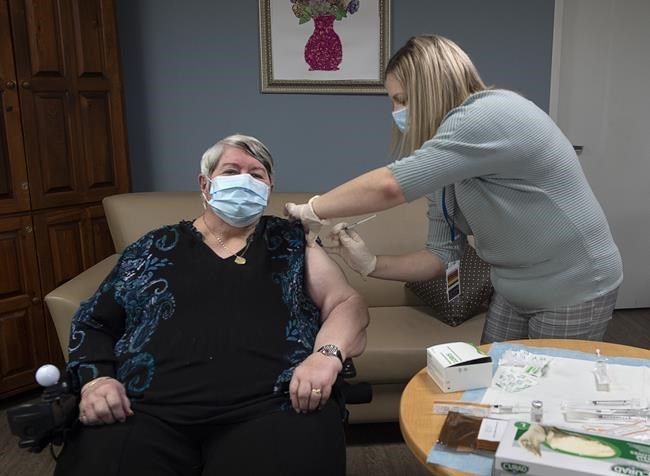 HALIFAX — An 85-year-old resident of a Halifax long-term care home that was devastated by COVID-19 broke into a slight smile as she was asked how it felt to get her long-awaited vaccination against the virus.

Audrey Wiseman said she was excited to be among the first of the 385 residents at the Northwood long-term care facility to get a dose of the Moderna vaccine, as Nova Scotia began to expand the first phase of its immunization program on Monday.

Fifty-three of the province's 65 pandemic-linked deaths occurred at Northwood's Halifax campus after an outbreak raged through the facility last spring.

"I won't be able to get the COVID I hope," Wiseman said after getting her shot. "That means a lot, because I saw quite a few that had it and didn't quite come through it."

Ann Hicks, 77, said she was "absolutely delighted" to get her dose of vaccine. Hicks said she had been isolated on a floor where many residents were hit by the virus although she managed to avoid becoming infected.

"I realize this is a start to preventing me from getting COVID," Hicks said. "I'm grateful in getting it and I will do anything to co-operate with Northwood in keeping us safe."

Josie Ryan, executive director of Northwood's long-term care program, said it's expected the majority of residents of the Halifax campus would be vaccinated by the end of the week. Ryan pointed out that 591 staff at the facility have been in the process of being immunized since Dec. 14.

She said despite the vaccine program it would likely be another six to eight months before strict precautions at the facility could be eased.

"I think it gives us a sense of safety especially after what we went through in the spring," said Ryan. "I really hope it brings us back to being a place where people are able to live free."

In Cape Breton the first person to receive the vaccine from outside of the Halifax area was Darlene White, a licensed practical nurse in the hospital's COVID-19 unit.

"Hopefully we are going to get back to I guess what we call the new normal," said White. "I don't think we'll ever be back to what we were in past years, but I think this is the first step."

Last week provincial health officials said that another 2,925 doses would be shipped this week to the Colchester East Hants Health Centre with a clinic to begin there next Monday.

The province also said that it expected to receive a combined total of 140,000 doses of the Pfizer-BioNtech and Moderna vaccines by the end of March — enough to immunize 75,000 people during the first phase of its immunization plan.

The province received a combined 9,550 doses in December, with 2,720 doses of the Pfizer vaccine administered to front line health workers in the Halifax area and another 2,720 reserved for a second dose, while 3,700 doses of the Moderna vaccine were reserved for long-term care facilities.

This report by The Canadian Press was first published Jan. 11, 2021.