‘No certainty’ for COVID-19 vaccine in Nova Scotia, says Strang

The federal government advises that a small number of people could get vaccinated as early as January
Nov 21, 2020 11:00 AM By: Chris Stoodley 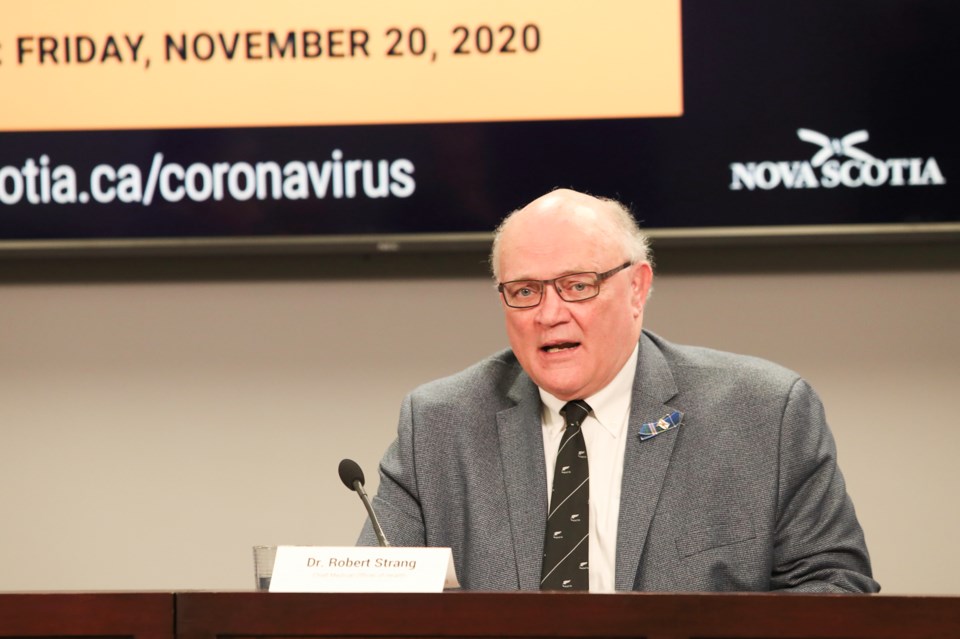 During Friday’s COVID-19 update from Nova Scotia’s premier and chief medical officer, Dr. Robert Strang said there’s no certainty of a vaccine in the province.

He said the federal government has made procurement arrangements with various potential vaccine candidates but many of them aren’t licensed in Canada.

As of Oct. 27, seven candidates, including Pfizer and Moderna Inc., have committed to supply the country with vaccines to cover a portion of or the entire population.

Strang also said the federal government advises public health to be prepared to vaccinate very small numbers of people as early as January.

“By saying that, I’m not saying by any means there’s any certainty but be prepared,” he said. “I think the one thing that we can make sure every Nova Scotian understands is that when we ultimately get vaccine, at least in the initial few months, we’re going to get very small amounts of vaccine.

“We’re going to have to be very focused and targeted. It’ll only be people who are judged to be at the greatest risk for severe outcomes from COVID or healthcare workers that will get the vaccine.”

Who’s judged to be high-risk was determined by the National Advisory Committee on Immunization (NACI) which has been approved by deputy ministers and ministers of health. Those who are deemed high-risk include people who are of older age, people with other high-risk conditions and healthcare or essential workers.

Strang said those are large groups, so public health is pushing the NACI to be more specific in who qualifies as high-risk.

“One of the things we’re certainly pushing is that we need to be consistent across the country,” he said. “If you’re identified as highest-risk and a priority for vaccination in Nova Scotia, that should be the same group by-and-large that’s in New Brunswick, Ontario, et cetera.”

Who will be distributing the vaccine depends on various factors including how much vaccine Nova Scotia receives and how it must be stored and handled. Between January and March, Canada is set to receive 4 million doses of the Pfizer vaccine and two million doses of Moderna's vaccine.

“There’s so many unknowns here that we cannot yet be definite about ‘who, where, how’ at this point in time,” he said. “You need to know that we are working as fast as we can to get as much planning that we can done so when vaccines become available, we can move that forward very quickly.”

As of Friday, Nova Scotia reports 28 active cases of COVID-19.

We may need to go above and beyond to get restrictions lifted in two weeks
Nov 25, 2020 5:25 PM
Comments
We welcome your feedback and encourage you to share your thoughts. We ask that you be respectful of others and their points of view, refrain from personal attacks and stay on topic. To learn about our commenting policies and how we moderate, please read our Community Guidelines.