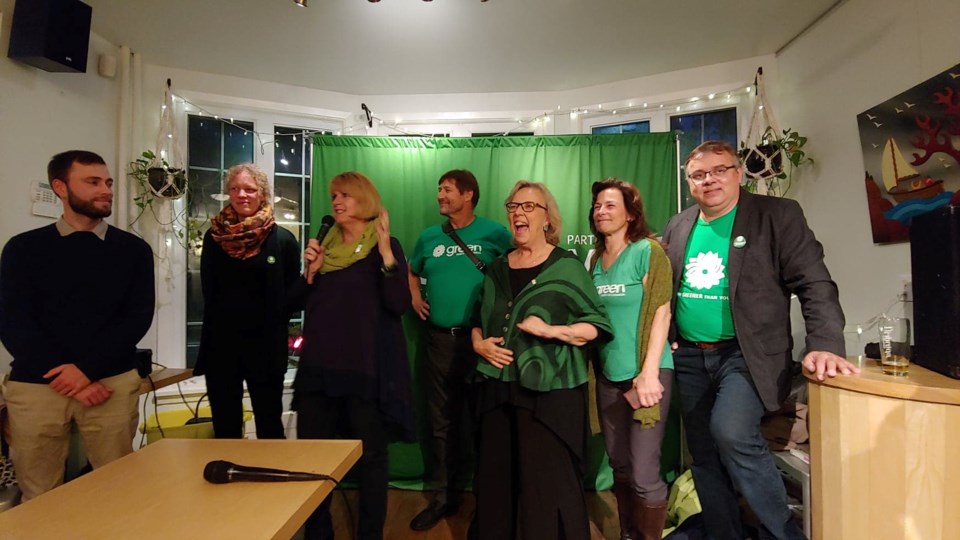 Elizabeth May in Halifax with candidates (Matthew Moore/HalifaxToday.ca)

Elizabeth May helped local candidate, Jo-Ann Roberts, campaign in the South End with just over a week left in the federal election campaign.

May calls the Maritimes "fertile ground" for the Green Party, citing a strong provincial caucus in New Brunswick and holding official opposition status in PEI.

While driving through the South End in an electric car, May highlighted strong local candidates and says coming back to the area after visiting a few weeks ago is no mistake; she says the Greens are an honest threat.

When asked about the lack of Green support in Nova Scotia at the Provincial level, May says what she has heard at the doorstep might mean a shift federally.

The timing of May's visit to the region was no accident.

"Thanksgiving weekend is when people sit around and decide what they're going to do," May says.

When asked about Nova Scotia's Premier, and the environmental consciousness of Stephen McNeil, May says the ball has been dropped on a number of fronts.

"We haven't moved fast enough off coal in this province, we're still looking for loopholes to burn coal," says May.

May was also disappointed about the reopening on the Donkin Coal mine, saying last month when she was in Halifax that it was 'an atrocity'.

Once May and Roberts had wrapped up campaigning for the night, May made her way into a coffee shop where she was greeted by supporters who were excitedly waiting for her.

"Voters know I care about the Maritimes. They know I know Maritime issues."