Hundreds of eagles spending winter in the Sheffield Mills area will continue to be fed at the corner of Bains Road and Middle Dyke Road until the end of March
Feb 1, 2021 12:30 PM By: Katie Hartai 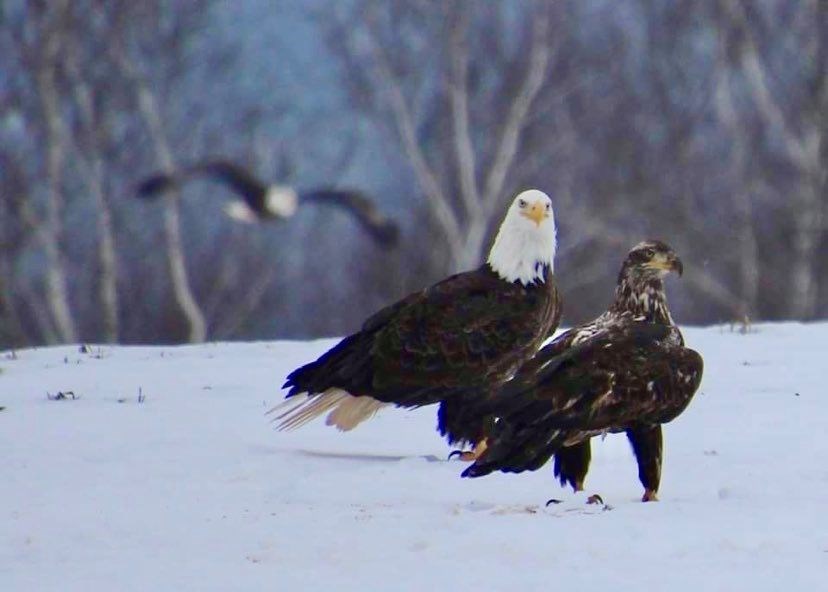 A small Nova Scotia village known to be a destination for eagle watching is encouraging local sightseers to check out the resident and wintering raptors in spite of its annual festival being cancelled.

Sheffield Mills has held The Eagle Watch Festival for nearly 30 years. In effort to prevent the spread of COVID-19, the community made the difficult decision to cancel in 2021.

Typically, the last weekend in January and first in February would bring thousands of spectators to the edge of a farmer’s field where the eagles are fed dead chickens daily throughout the winter months. With a bit of luck, the birds of prey put on a show for observers calling out to one another, diving and quarrelling over the carcasses.

“It attracts a large crowd of people because it isn’t often you get to see massive swarms of eagles, so it is a big draw for nature lovers and photographers,” says Megan Hodges, a member of the Sheffield Mills Community Association.

“We get camera groups from Quebec, Alberta, people come from across the United States, and we have had people from across Europe,” she says. “With the restrictions on travel we just felt holding it this year would be irresponsible.”

Hodges says while official festivities are cancelled, locals are welcome to come see the regal birds as long as they respect physical distancing rules and other public health measures.

“It’s incredible to watch,” she says. “The eagles are massive with a wingspan of over one metre and so to watch them swoop so closely and kind of wrestle with each other, and fight over the chickens and do what they do naturally is really cool.”

Resident eagles in the valley are joined in the winter by birds from other parts of Nova Scotia, Prince Edward Island and Newfoundland. They tend to gather in larger numbers where discarded poultry remains are readily available.

“The practise has been for a long time to discard dead chickens and turkeys by throwing them in a field, so I think the eagles are pretty well trained to know that there is a reliable food source for them here in the winter,” she says.

The eagles will be fed in the field at the corner of Bains Road and Middle Dyke Road between 9 a.m. and 10 a.m. every day until the end of March.

Following an exciting morning of watching the eagles in action, Hodges recommends dining out at one of the local restaurants.

“There are so many wonderful businesses in Canning and the area that we highly recommend stopping at for breakfast, or going to for lunch,” she says. “Although we aren’t doing a breakfast there are many places where people are already established with COVID protocols, and they have great menus.”

Typically, the Sheffield Mills Community Centre is packed with attendees filling their stomachs with all the best breakfast foods. Using as many local ingredients as possible, the hall cooks up pancakes and sausages drowned in maple syrup or warm blueberry sauce.

The annual breakfast is the biggest fundraiser for the century-old school house. Hodges says anyone able and interested in donating to help the hall make it through COVID-19 challenges, can send cheques to 591 Bains Road, Centreville, NS, B0P 1J0.