Beachgoers being asked to protect the piping plover population

Disrupted mainly by human interference, litter and dogs running off-leash, last year's breeding numbers for the endangered, stocky shorebirds were down to 45 in Nova Scotia
Jun 7, 2021 1:44 PM By: Steve Gow 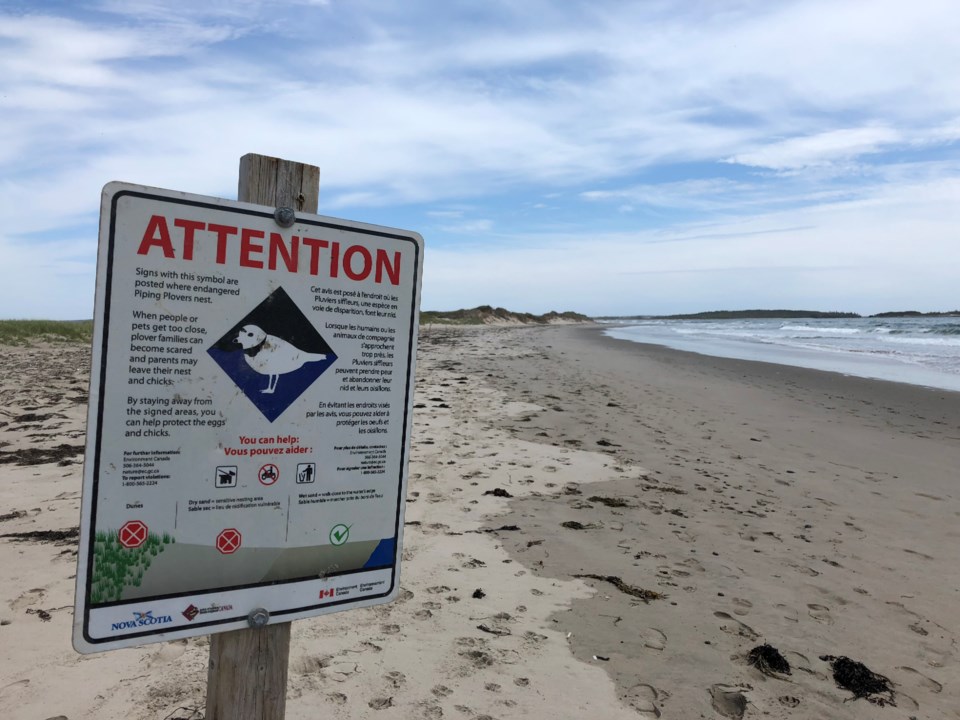 A sign warns beachgoers to stay away from piping plover nests (Meghan Groff/HalifaxToday.ca)

The loosening of lockdown measures may be good news for humans but experts are warning that an increase of outdoor adventurers may be bad for some small shorebirds.

With the provincial government announcing that camping and travel throughout the province is again permitted, many people will be eager to hike around the province’s many beaches and that means further threats to already endangered piping plovers.

For this reason, outdoor enthusiasts are being reminded to obey all signs warning of possible nesting grounds along many Nova Scotia beaches.

“Signs are posted for a reason and they let you know what you should or shouldn’t do at these beaches,” says Laura Bartlett, the Nova Scotia program coordinator for Birds Canada. “(Also) keeping dogs on leash is really helpful. Even the friendliest dog appears as a threat to piping plovers and other birds.”

A small, stocky shorebird that commonly nests in open, dry sandy areas most often closer to dunes or areas of sparse vegetation, piping plover populations have been struggling in Nova Scotia for years.

In 2018, there were less than 50 breeding pairs of the birds across the province and that number has virtually unchanged.

“As of last year in 2020, we had 45 breeding pairs in the province,” says Bartlett, adding most piping plovers are spread out between Lunenburg County to Shelburne County as well as around Antigonish, Pictou and up towards the northwestern coast of Cape Breton.

“HRM has quite a number of beaches that are listed as critical habitat for piping plovers but they haven’t had any piping plovers nest there in at least the last ten years — if not longer,” adds Bartlett.

The shorebirds have not set up breeding grounds along HRM beaches mainly because of human disruption and off-leash dogs but Bartlett cautions people to continue to adhere to signs and remain on the lookout for piping plovers as the tiny birds are still often spotted in the area.

“We do still see them stopping over which means, as they’re flying by they see the beach and they think it looks like a good stop,” says Bartlett. “(So) there is hope that if things get better on those beaches, they might come back.”

Bartlett suggests that beachgoers walk on wet areas of the sand as piping plovers will only nest in dry sand or pebbles and reminds people to never leave their trash behind as litter will attract raccoons and other predators of the shorebird.

According to Canada’s Recovery Strategy and Action Plan for the Piping Plover, the birds can arrive on breeding grounds as early as March and nest until mid-July.  From a clutch of four eggs, the young will begin hatching as early as late May or early June.

Bartlett insists that there is reason to believe this could be a more productive year for the bird’s breeding numbers as there have already been piping plovers spotted at two new beaches in Nova Scotia where they have never previously been seen. Bartlett feels that if people act responsibly, the numbers of sightings could go up.

“It’s a little early to have a sense of how many pairs we have and how they’re going to be doing with their nest (but) I’m optimistic that the number will stay about the same, if not increase,” says Bartlett, adding that any jump in the population of piping plovers isn’t only good for the birds.

“If we are seeing piping plovers at these beaches, it’s a good sign that these beaches are healthy and can continue to be good for both animals and people into the future.”