ST. JOHN'S, N.L. — Sexual assault allegations are piling up against officers of Newfoundland and Labrador's provincial police force, but it's not clear what will come of the accusations or whether they'll wind up in court. St.
Jul 21, 2021 3:58 PM By: Canadian Press 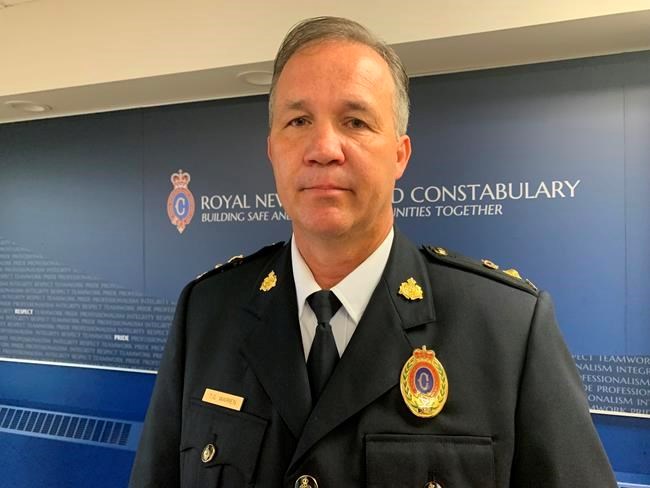 ST. JOHN'S, N.L. — Sexual assault allegations are piling up against officers of Newfoundland and Labrador's provincial police force, but it's not clear what will come of the accusations or whether they'll wind up in court.

St. John's lawyer Lynn Moore said Wednesday afternoon she's heard from nine women who've made allegations against seven officers with the Royal Newfoundland Constabulary, noting that calls and messages from women are still coming in and the numbers could rise. Six of the seven officers have since retired from the force, she said.

Earlier Wednesday, the force held a news conference to announce it's looking into allegations against four officers after speaking with Moore earlier in the week. Supt. Tom Warren said only one has been identified so far. That officer has retired, but his records are now under scrutiny, Warren said.

"We do have a review started, and we are going to go back and review the disciplinary records of this officer," Warren said. "If there is a criminal investigation, and if ... that investigation merits criminal charges, retired or current, that officer will be held accountable for those criminal charges."

The Royal Newfoundland Constabulary shares policing duties in the province with the RCMP, covering the St. John's area as well as the western Newfoundland region of Corner Brook and part of Labrador. There are about 400 officers on the force.

In the past five years, four officers have faced criminal investigations for sexual assault, but none was charged, Warren said. One of those officers has since retired, and the rest remain on the force, he said.

Mike King, the director of the province's police watchdog agency, said in a news release he has directed the Royal Newfoundland Constabulary to send him any further information about the allegations announced Wednesday.

The press conference was called after St. John's lawyer Lynn Moore tweeted Monday that she'd spoken with several women who said they'd been sexually assaulted by Royal Newfoundland Constabulary officers who have since retired. Most of them said they'd been assaulted after an on-duty officer had offered to give them a ride home from downtown St. John's, she said.

The news comes less than three months after Carl Douglas Snelgrove, a constable with the force, was convicted of sexual assault in provincial Supreme Court. He raped a woman in her living room while on duty in 2014 after offering her a ride home from a downtown nightclub while he was on duty. His case went to trial three times following a successful appeal of a not-guilty verdict and a subsequent mistrial, and the woman he assaulted testified every time.

Moore told The Canadian Press the women she'd heard from indicated it was common practice for some male officers to scout the downtown streets at night to offer women rides home, Moore said. "I've spoken to or messaged with a large number of women who have identified problematic behaviour," she said. "I'm not sure what is the magic number in pointing to a systemic problem, but there is definitely a problem that needs addressing."

So far, she said, none of the women want to make formal reports with the police. "I have no idea what's going to happen," she added. "One woman told me that I was the first person she ever told this to. It's in its infancy right now .... Right now we're just listening and gathering information, and there really is no grand plan."

The force contacted Moore about the allegations in an effort to identify the officers involved and to investigate, Warren told reporters Wednesday. "We need names, we need persons identified," he said, adding that victims will be given supports and guidance if they do decide to report to police and name the officers involved.

During the Snelgrove trial, it was revealed the Royal Newfoundland Constabulary does not require male officers to radio in whenever they transport a women in their vehicle. The Mounties, for example, have such a policy and it is explicit, a spokesperson for RCMP said in a recent email to The Canadian Press.

Warren said the latest string of accusations is an opportunity for a policy review. "Some of these policies are dated," he said. "In terms of transporting females home, that's not something that we should be doing."

Moore said it's hard to tell whether the persistence shown by the complainant in the Snelgrove case has emboldened the women coming forward now. "I have heard from people that ... the number of officers circling the downtown has decreased," she said. "I don't know if she's inspired people, but she's certainly opened a can of worms that everybody else was afraid to open."

This report by The Canadian Press was first published July 21, 2021.