FREDERICTON — The COVID-19 pandemic, the economy, and vaccines were among the topics as the New Brunswick legislature got back into session Tuesday.
May 26, 2020 6:06 PM By: Canadian Press 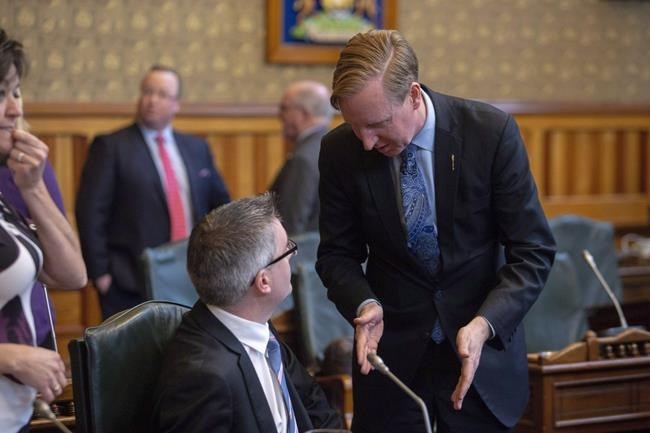 FREDERICTON — The COVID-19 pandemic, the economy, and vaccines were among the topics as the New Brunswick legislature got back into session Tuesday.

Desks were spread far apart, and many of the members had to sit in the balcony that's usually reserved as a public gallery in order to maintain physical distancing.

"The benches are hard up there," Education Minister Dominic Cardy said later.

With a bit of a heat wave in the province, temperatures were getting uncomfortable in the house, but Cardy said the political temperature was a bit cooler than usual as a result of collaboration among the parties since the pandemic began.

Outside the legislature, about 200 people protested a proposed bill that would make vaccinations mandatory for children in schools and daycares unless they have a medical exemption, starting in September 2021.

The protesters — many of whom did not maintain physical distancing — held signs with phrases such as Protect our Freedom, Say No to Bill 11 and Say No to Mandatory Vaccinations.

Debate on the bill is expected to begin Wednesday. Cardy said he was disappointed by the protesters.

"Their words and their actions speak for themselves. They speak against science, against reason, against protection for vulnerable New Brunswickers," Cardy said.

Much of the first question period Tuesday dealt with the economy, and Premier Blaine Higgs expressed his concern that heavy spending by the federal government to deal with the pandemic could put future transfer payments in jeopardy.

"Three billion dollars of our budget will be transfer payments. So if that got significantly changed, we're in trouble," Higgs said.

Liberal Leader Kevin Vickers said his party would continue to push the provincial government to invest in businesses that are hurting in the aftermath of the pandemic.

The province went more than two weeks without any new cases of COVID-19 but now has two active cases in the Campbellton area, where large groups have been protesting to pressure the government to open the border with Quebec.

Higgs said he worries that protests like that and the one in Fredericton on Tuesday, along with good weather, will lead to a wave of new cases.

"I'm afraid that caution is going to get lost and I just hope that a situation like Campbellton doesn't just explode overnight," he said.

This report by The Canadian Press was first published May 26, 2020.

Group launches legal action against N.B. government for greater abortion access
Oct 30, 2020 11:13 AM
Comments
We welcome your feedback and encourage you to share your thoughts. We ask that you be respectful of others and their points of view, refrain from personal attacks and stay on topic. To learn about our commenting policies and how we moderate, please read our Community Guidelines.