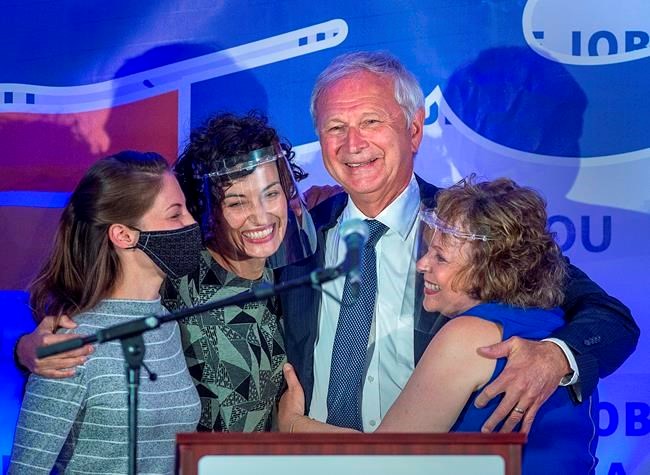 QUISPAMSIS, N.B. — New Brunswick's Progressive Conservatives won a majority government on Monday, concluding a highly unusual election race — the first in Canada since the emergence of the COVID-19 pandemic.

"Come what may in the months and years ahead, we know we'll have stability and experience leading us through these challenging times," Premier Blaine Higgs told about 50 supporters who were wearing masks and standing two metres apart in a Quispamsis, N.B., bingo hall.

"I want to thank every New Brunswicker who showed the country how democratic elections can be held safely during this pandemic."

With all votes counted, the Tories were elected in 27 ridings, the Liberals in 17, the Green party in three and the People's Alliance in two. At least 25 seats were needed for a majority in the 49-seat house.

As Higgs walked to the stage with his wife and two daughters, all four were wearing full face shields. When the premier arrived at the podium, he took off the shield, looked at the sparse crowd and said with a smile: "There's nothing like coming to a packed hall. This is life in COVID."

Soon after Higgs delivered his victory speech, Liberal Leader Kevin Vickers announced he would be stepping down.

"Obviously with the results of this evening, it's time for another leader to step up and take this party forward," he said. "I'm hoping the next leader will take the torch and bring it up higher."

It's the first time a government in New Brunswick has won two consecutive terms since Bernard Lord led the Tories to re-election in 2003.

Higgs called a snap election four weeks ago, saying his 21-month-old minority government lacked stability at a difficult time for the province.

His opposition rivals accused him of political opportunism, but Higgs gambled that the electorate wouldn't see things that way, given that he had won widespread praise for his leadership in the face of the rapidly evolving COVID-19 crisis.

During the last week of the campaign, Higgs said he wanted a majority win to ensure the Tories could focus on health care and keeping people safe. He said any other option would put the province at risk.

The 66-year-old former Irving Oil executive cast himself as a dull but dependable in a crisis.

"Maybe I'm boring, but I'm no surprise," he said last month. "I'm consistent. You can trust me."

During the 28-day election race, few candidates campaigned door-to-door, and those who did were careful to wear a mask and stand well back when speaking to voters. There were no handshakes, no kissing of babies, no big rallies.

Campaign literature was sent through the mail and the party leaders took part in outdoor events that were livestreamed, as masked candidates stood well in the background to comply with physical distancing rules. And at most campaign stops, Higgs wore a plastic face shield.

On the campaign trail, Vickers accused Higgs of listening to political advisers rather than the people of New Brunswick, arguing that the election wasn't wanted or needed.

Acclaimed Liberal leader in 2019, Vickers had served as sergeant-at-arms in the House of Commons, where in 2014 he was credited with fatally shooting a gunman who had fired a rifle inside Centre Block.

As the Tories secured their majority win on Monday, Coon said the electoral system has to be changed.

"It speaks to the need for electoral reform, so we don't have these majority governments where premiers can have their way," he said.

In recent election campaigns in New Brunswick, voters were confronted with polarizing issues, such as hydraulic fracturing, skyrocketing auto insurance rates or privatization of the province's Crown-owned utility, NB Power.

But this election was all about the province's response to COVID-19.

New Brunswick has one of the lowest levels of infection in Canada — bested only by P.E.I. and the territories. That fact became Higgs' key talking point during the election race. He also cited forecasts suggesting the province was leading the country in terms of an economic recovery.

Higgs highlighted the fact that New Brunswick had experienced a smaller economic contraction than the rest of Canada due to COVID-19, mainly because the province contained the virus quickly.

The Tories argued during the campaign that all that good news was a result of Higgs' leadership.

By contrast, Vickers took a gloomier view, saying the Tories were pretending that everything had returned to normal, when "businesses are still feeling the repercussions of the COVID-19 pandemic."

While the Tories managed to secure a majority, they largely failed to make gains within the province's French-speaking regions.

As a result, the province remains divided along linguistic lines, with the Tories dominating in the English-speaking ridings of central and southern New Brunswick and the Liberals hanging on to the French-speaking ridings in the north — a problem that emerged after the 2018 election.

The leaders of the smaller parties warned voters against electing a majority government, saying the minority arrangement had performed well with an all-party cabinet committee handling the COVID-19 crisis.

"We have made some significant changes in the political landscape," he said. "We still have our foot in the door, make no mistake about it."

Mackenzie Thomason, 23-year-old interim leader of the New Democratic Party, said during the campaign the smaller parties were there to "keep the big parties' feet to the fire." The NDP didn't win any seats in the 2018 election and it was shut out again Monday.

— With files from Michael MacDonald in Halifax

This report by The Canadian Press was first published Sept. 14, 2020.