CHARLOTTETOWN — Canada's smallest province finds itself in an enviable position during the COVID-19 pandemic, with just 26 people who have tested positive since the outbreak began, and 23 of them have recovered. Dr.
Apr 16, 2020 3:37 PM By: Canadian Press 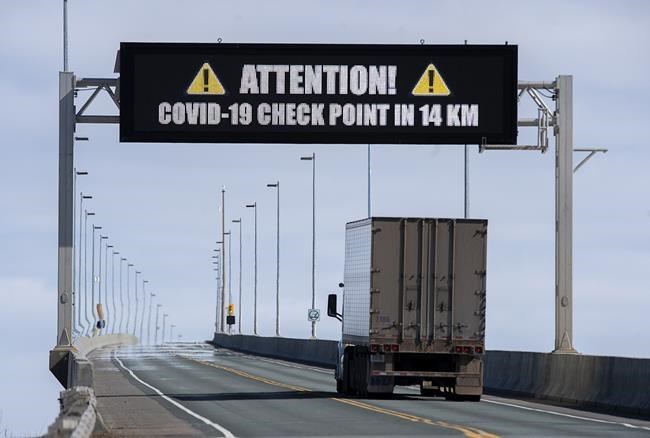 CHARLOTTETOWN — Canada's smallest province finds itself in an enviable position during the COVID-19 pandemic, with just 26 people who have tested positive since the outbreak began, and 23 of them have recovered.

Dr. Heather Morrison, the province's chief public health officer, said it's proof the decision to quickly implement rules for self-isolation and social distancing was the right one.

"I think the low numbers have reinforced and reassured people that we have been doing the right things up to now," Morrison said Thursday.

"I think we were relatively quick at closing our non-essential businesses, and we instituted screening and information about self-isolation at the (Confederation) bridge and at the (Charlottetown) airport. We have just those two points of entry which makes us quite unique," she.

The Island, with a population of about 157,000, also has a seasonal ferry service that runs between Wood Islands, P.E.I., and Caribou, N.S., but that has not started yet.

In early April, the province stepped up its screening program at entry points with what it calls "Operation Isolation."

"Besides the screening at the bridge for health questions, name and contact number, we are asking about who is going to be helping to support you for your period of self-isolation and basically what that plan entails. We are now also calling everyone coming into the province for that 14 day period of isolation," Morrison said.

She said the calls ensure people have the necessary supports and reinforce the need to stay in self-isolation.

So far, every positive case has been the result of travellers who returned to P.E.I. — 25 from international travel and one from an out-of-province trip. There have been no cases of community transmission.

So far 36 people have been turned away at the Confederation Bridge. That includes snowbird Barry Humberstone, who was declined entry Tuesday after driving from Florida.

The 60-year-old has owned a home in Northport, P.E.I., for less than a year, after moving there from Georgetown, Ont., but spent the last six months in Florida with his American girlfriend, Michelle Williamson.

Humberstone said he was denied entry to the Island because his driver's licence and car registration are still from Ontario — something he admits he should have changed sooner. As such, he wasn't able to prove his principle residence was in Prince Edward Island.

Humberstone then drove to Ontario in the hope of staying with family there, but was contacted by Island officials late Wednesday to explain what documents and arrangements were needed to enter P.E.I.

He slept in his car for another night and finally was able to get home Thursday afternoon.

Premier Dennis King said it's not in the nature of Islanders to want to turn away anyone wanting to visit.

"But for the short term, taking these measures now we feel will give us the best opportunity to keep Islanders safe and healthy and will position us to be in the best possible position for an economic turnaround sooner rather than later," King said Thursday.

P.E.I. Transportation Minister Steven Myers said while the rules are strict, they have been effective in controlling COVID-19 in his province.

"We are far from through this. We have a long way to go yet, like all other jurisdictions in Canada," Myers said.

The province took another step Thursday by declaring a state of emergency in addition to the earlier state of public health emergency. Public Safety Minister Bloyce Thompson said the new declaration — to take effect Friday — will allow more resources to be dedicated to address the pandemic and monitor border points.

"That's the bridge, the airport and the ferries. That is also any piece of shoreline — the beach, a wharf, a harbour and a port," Thompson said.

Morrison said she's proud of how Islanders have respected social distancing and found ways to support their friends, family and neighbours.

"There's been lots of support offered, whether it's picking things up for others or food. People like bringing food to each other here for any possible reason. That is part of the community culture that is here on Prince Edward Island," she said.

Morrison said the province has not had an actual peak in cases, and should be able to begin easing some restrictions in the coming weeks for activities within the province.

She said measures for self-isolation of people coming into the province will have to remain in place for some time to come.

This report by The Canadian Press was first published April 16, 2020.