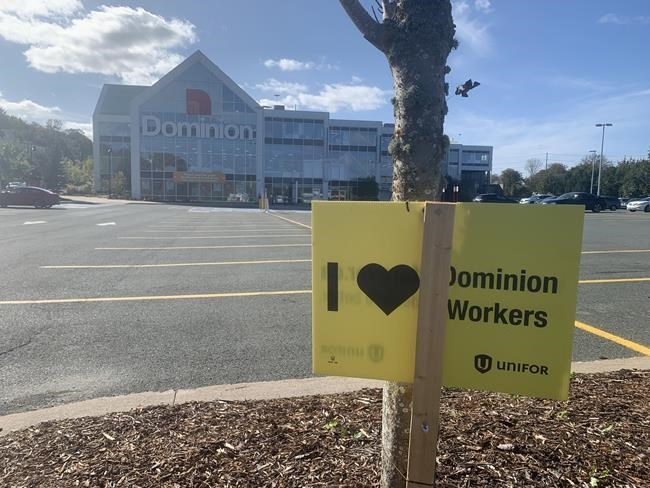 Const. James Cadigan said Wednesday the officers were from a "highly trained unit" deployed in situations requiring "de-escalation." He could not confirm how many officers were on site, but said police responded to complaints from small businesses and organizations that were concerned about the disruption.

Dominion workers in Newfoundland and Labrador went on strike in late August after rejecting a contract offer from parent company Loblaws Inc., which included a $1-an-hour pay increase spread over three years. Weston Foods is a subsidiary of George Weston Ltd., which owns Loblaws.

Wrice said workers had been blocking the trucks outside the Weston Foods bakery for two days in an effort to get Loblaws back to the bargaining table. On Wednesday evening, the union announced negotiations were scheduled to resume Thursday.

Wrice said police had no right to interfere with Tuesday night's picket line because Loblaws had not received a court order preventing workers from picketing that location.

The officers threatened to make arrests before the workers left peacefully to demonstrate at a nearby building, Wrice said. The trucks were then able to leave the parking lot.

Cadigan would not confirm if officers threatened to arrest the workers but said police spoke to the union leaders on site about the "parameters of the Criminal Code." Blocking a public passageway is a criminal offence, Cadigan said, adding that RNC officers "outlined" that fact to the striking workers Tuesday night.

Cadigan said he was "appreciative" the situation was resolved peacefully and respectfully.

In a news release Wednesday, provincial NDP Leader Alison Coffin said the RNC response was "an unnecessary use of force," which put the "right of workers in this province in jeopardy."

This report by The Canadian Press was first published Oct. 28, 2020.

New Brunswick to require all visitors to self-isolate, reports 12 new COVID-19 cases
Nov 26, 2020 6:16 PM
Following Mount Saint Vincent, Memorial offers free tuition to former foster kids
Nov 26, 2020 3:35 PM
Three new cases of COVID-19 in New Brunswick, 'record' numbers in self-isolation
Nov 25, 2020 5:19 PM
Comments
We welcome your feedback and encourage you to share your thoughts. We ask that you be respectful of others and their points of view, refrain from personal attacks and stay on topic. To learn about our commenting policies and how we moderate, please read our Community Guidelines.