ST. JOHN'S, N.L. — Newfoundland and Labrador's premier says the province's food supply is not at risk after a major shipping company suggested shipments to the island could be reduced due to the pandemic.
Apr 14, 2020 5:21 PM By: Canadian Press 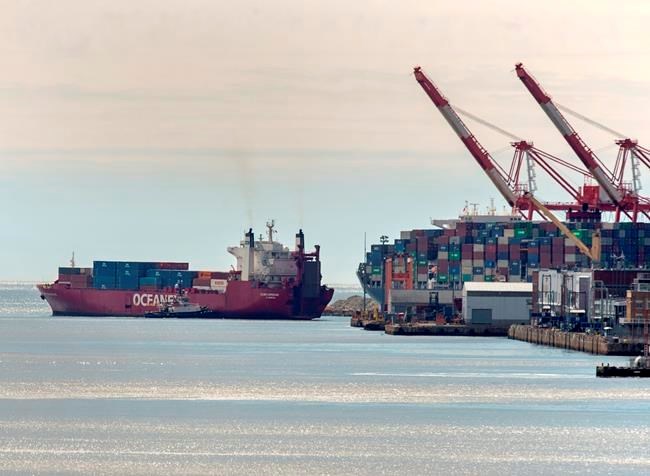 ST. JOHN'S, N.L. — Newfoundland and Labrador's premier says the province's food supply is not at risk after a major shipping company suggested shipments to the island could be reduced due to the pandemic.

Sid Hynes, chairman of shipping company Oceanex, told CBC Monday that weekly deliveries of food and other supplies to St. John's may be affected without a federal subsidy to cover his company's losses.

He said Oceanex is about $2 million short of its required weekly operating costs due to the pandemic. The company did not immediately respond to a request for an interview.

Premier Dwight Ball said Tuesday that the province has been reassured that trucking companies and Crown corporation Marine Atlantic can step up to meet demand.

He said people don't need to be worried and should not rush out to stores to stock up in light of the news.

"Shop once a week, shop for essential items," Ball said. "There will be food security in Newfoundland and Labrador."

Ball added he has been talking with federal MP Seamus O'Regan to discuss solutions to the Oceanex issue, which he called "too critical to ignore."

O'Regan posted a statement to Twitter Tuesday saying talks about Oceanex were ongoing with Transport Canada and Finance Department officials.

"We're looking at all options to make sure food and medical supply chains stay in place," O'Regan said.

A spokesman for Marine Atlantic said in a statement Tuesday that two of its four vessels are in service to meet demand, and those ships are sailing about half full.

"Marine Atlantic is committed to meeting the needs of our customers and maintaining our essential ferry link to the Province of Newfoundland and Labrador," the statement read.

"Should demand increase and additional capacity be required, Marine Atlantic has the ability to add additional crossings to the schedule with the two vessels currently on standby mode."

Gerry Byrne, provincial minister of fisheries and land resources, said the province values the jobs and supplies provided by Oceanex but said there's no evidence that fewer deliveries by the company would lead to a food shortage.

"It's very premature and somewhat dangerous to be asserting such statements without evidence or without fact," Byrne said by phone.

He said Marine Atlantic already delivers the majority of the province's perishable goods, including food and medicine, and said the federal government has reassured the province that there will be no food shortages.

Justice Minister Andrew Parsons, who represents Port aux Basques, where Marine Atlantic's terminal is located, wrote on Twitter that the situation "is not as dire as reported."

"No need to hoard, panic or fear," Parsons wrote.

The Seafarers' International Union of Canada, whose members work on Oceanex vessels, called for federal aid to the company, saying hundreds would lose their jobs if the company tied up some vessels.

"Taking into account the current circumstances, now is not the time to turn our backs on the people and companies essential to the well-being of Canadian communities," union president James Given said in a statement.