N.L. government advises motorists to drive with care on roads full of caribou

HOWLEY, N.L. — After the first snowfall every year, the population of Howley, N.L., suddenly swells, and traffic gets so bad the government has to step in.
Nov 19, 2020 10:12 AM By: Canadian Press 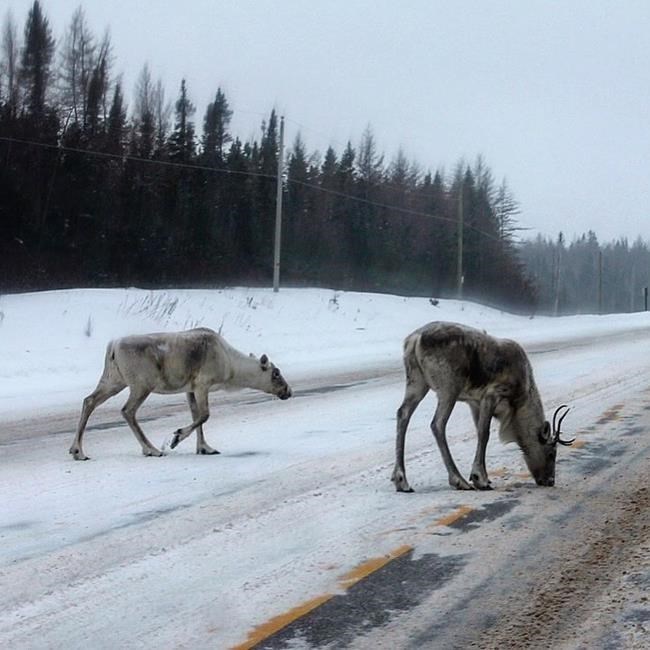 HOWLEY, N.L. — After the first snowfall every year, the population of Howley, N.L., suddenly swells, and traffic gets so bad the government has to step in.

Howley town clerk Debbie Janes says herds of caribou head in from the surrounding wilderness to spend the winter near the lone road heading into the western Newfoundland town.

Janes says they like the salt on the roads, and they lick the pavement all winter long.

This year's crowd arrived a few weeks ago, and on Wednesday, the province's Department of Fisheries, Forestry and Agriculture issued a public advisory, reminding drivers to be careful.

The advisory said the animals are expected to stick around.

Janes said it's always special when the caribou first arrive, and most people in Howley, a town of about 200 people, appreciate the extra company.

"They come with Santa!" Janes said, laughing. "They're pretty cute, I must say. We look forward to having them around."

Sometimes there are as many as 40 animals on the road in the morning as she's heading to work, she said in an interview Wednesday. "I barmp my horn and they'll just look at you. Other times, they'll just meander across the road."

She said they'll be hanging out around Howley until the snow starts to melt.

In the meantime, the province is asking motorists in the area, as well as around St. Anthony on the Northern Peninsula, to be alert. They are advised to scan both sides of the highway, pay attention to caribou warning signs, avoid driving at dusk and dawn and have passengers watch out for caribou.

This report by The Canadian Press was first published Nov. 19, 2020.

New Brunswick to require all visitors to self-isolate, reports 12 new COVID-19 cases
Nov 26, 2020 6:16 PM
Comments
We welcome your feedback and encourage you to share your thoughts. We ask that you be respectful of others and their points of view, refrain from personal attacks and stay on topic. To learn about our commenting policies and how we moderate, please read our Community Guidelines.