Despite the widespread praise he won for his effective management of the COVID-19 crisis, New Brunswick Premier Blaine Higgs failed to win over key parts of the province once the ballots had been tallied on election night.
Sep 15, 2020 6:52 PM By: Canadian Press 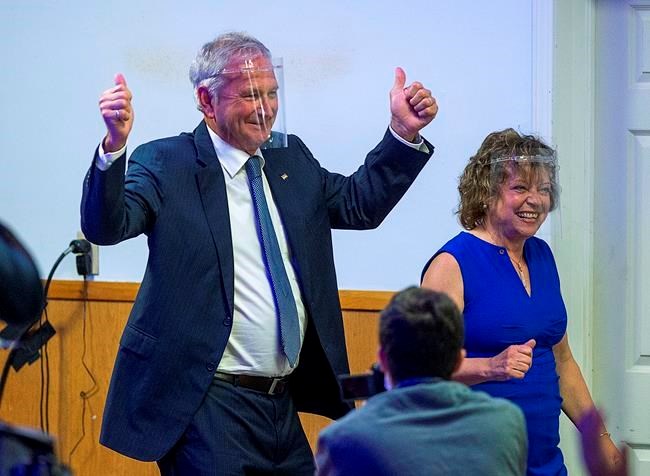 Despite the widespread praise he won for his effective management of the COVID-19 crisis, New Brunswick Premier Blaine Higgs failed to win over key parts of the province once the ballots had been tallied on election night.

Virtually all of the French-speaking ridings in the north and along the Acadian shore remain in the hands of the opposition Liberals.

As a result, the perennial split between francophone and anglophone voters has re-emerged, even though Higgs' Progressive Conservatives secured a majority of the seats on Monday night.

"It's not good," said Donald Wright, chairman of the political science department at the University of New Brunswick in Fredericton. "This election has reinforced the linguistic divide in this province, and where we go from here is anyone's guess."

Wright's concern is rooted in history.

For much of the 20th century, French-speaking residents were treated like second-class citizens in a province where they comprise one third of the population, he said. Very little changed until 1960, when Acadian Louis Robichaud became premier.

The Liberals under Robichaud governed the province for the next 10 years, promoting language rights and social reforms that culminated in the passage of the Official Languages of New Brunswick Act in 1969 — the law that made New Brunswick the only officially bilingual province in Canada.

But the debate over how that law would be implemented increased tensions in the province.

"We do not want a French-speaking Liberal party and an English-speaking Conservative party," Wright said. "That will fuel linguistic tensions, and no one wants to go back to the 1970s and that awful linguistic debate."

Roger Ouellette, a political science professor at the University of Moncton, said the problem today is that French-speaking voters in New Brunswick have too many reasons to distrust Higgs, who speaks halting French.

The professor cited social media posts during the election campaign that reminded francophones that in the 1990s Higgs ran for the leadership of the now-defunct Confederation of Regions (COR) party, which had promised to repeal the Official Languages Act.

As well, Ouellette stressed that Higgs had won the leadership of the Tory party in 2016 with virtually no support from French-speaking members.

"I would say that 95 per cent of the people in the room were anglophone," Ouellette said, recalling the leadership convention in Fredericton.

Francophones were also rankled by the fact that Higgs' previous minority government had been propped up by the People's Alliance party, which has focused its efforts on questioning the cost of bilingual services.

And in February of this year, Higgs scrapped a plan to reduce emergency room hours at hospitals in six small communities, including the Acadian communities of Caraquet and Saint-Anne-de-Kent.

"He had baggage from 30 years ago, he was elected to lead (the party) without francophones and he governs in 2018 with the People's Alliance," Ouellette said.

For his part, Higgs has said he has work to do when it comes to healing the party's rift with French-speaking New Brunswickers.

"I want to work with the regions," he said on Monday night after his victory speech. "That health reform thing was a mess-up."

The premier also said it will be difficult for him to ensure regional representation when he forms a cabinet, noting that his caucus has only one francophone member.

However, Higgs couldn't resist taking a partisan shot at voters in northern New Brunswick when asked about the lack of Tory seats in that region.

"There are ridings up north that would (always) vote Liberal," he said. "It wouldn't matter what you did. You could run a lampshade as a Liberal candidate. That has to change."

Still, the Tory party can take solace from the fact it has enjoyed strong support from francophones in the past.

Richard Hatfield, the longest-serving premier in the province's history, was wildly popular in northern New Brunswick even though he was an anglophone.

In office between 1970 and 1987, he supported the equality reforms introduced by Robichaud, created separate anglophone and francophone school systems and introduced legislation recognizing the equality of the two linguistic communities.

In 1999, the flawlessly bilingual Bernard Lord led the Tories to a landslide victory, winning 44 of 55 seats. He served for two terms.

"The doors are not closed forever," Ouellette said. "But there's some work for the Conservatives to do."