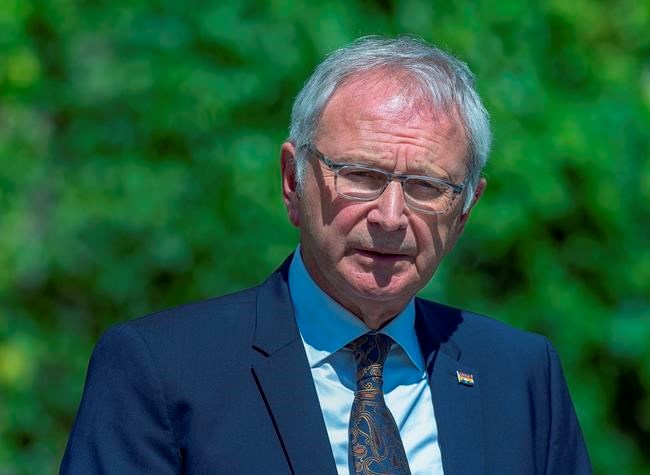 Blaine Higgs was campaigning Saturday in front of the rural hospital in the village of Perth-Andover, as voters in New Brunswick headed to the first of two advance polling days for the Sept. 14 provincial election.

The rural hospital issue — and how to shift health resources to care for an aging population — has proved to be one of the most volatile for the Tories over the past year.

The leader of the province's minority government had to scrap plans in February to reduce ER hours and convert acute-care beds into long-term care at the hospital in Perth-Andover, along with similar rural facilities in Sussex, Sackville, Grand Falls, Caraquet, and Saint-Anne-de-Kent, after a public outcry.

During his campaign stop in Perth-Andover, Higgs told reporters he'd just met with the mayor of the rural community and had committed to keeping emergency rooms open and acute care beds at the local hospital.

But he stopped short of committing to maintaining existing levels of service, telling reporters that will depend on "discussions with the community."

"I said I will work with the community to figure that out, because there is a challenge there ... I will absolutely commit we will be working with communities to find solutions that communities feel comfortable with because we need their support to make it real," he said.

During his opening remarks, Higgs said ways must be found to improve care for seniors in hospitals who need access to long term care beds.

Asked if the party will commit to funding more long-term care facilities and beds, Higgs said the province must find some shorter term solutions.

"We have facilities right now that aren't staffed properly all over the province," he said. "We have an infrastructure problem and a facility issue, none of which will be solved overnight."

"How do we utilize the facility (the rural hospital) to provide the right level of care for people that have no other options at this point ... I just feel that we can do better for residents that are in a hospital right now," he said.

Higgs noted that during the pandemic many seniors were successfully shifted into "the appropriate levels of care" to free up hospital beds for a possible surge of COVID-19 cases during the pandemic — suggesting that innovative solutions are possible.

He also announced during the campaign stop that his government will ensure seniors have access to high-dose flu shots this fall, citing the move as an example of a way to reduce pressure on the health system.

Liberal Leader Kevin Vickers focused on the hospital issue during the recent election debate, saying Higgs lost the trust of citizens when he tried to cut services to rural hospitals, calling it "reckless and damaging."

The Tory leader said on Saturday that he doesn't think the Liberals have a solid plan themselves.

"To walk away, and ignore the challenges we face, all we're doing is pushing the problem further down the road," said Higgs.

Vickers was campaigning in Oromocto on Saturday, but didn't make any announcements.

People's Alliance Leader Kris Austin was campaigning in Saint John, where he pledged to ensure every school has food programs available to kids of all ages as one method of reducing child poverty.

In a telephone interview Saturday, Austin said Higgs' comments back his argument that electing a minority government will help protect rural health care.

"A minority government will allow us as a party to ensure health care is protected in rural areas," he said.

Green Leader David Coon was campaigning in Fredericton all weekend.

A spokesman for Elections New Brunswick, Paul Harpelle, said turnout in the first day of the advance voting was strong, with more than 36,000 electors having voted as of 2 p.m.

However, Harpelle cautioned against citizens reading too much into the spike in voter turnout.

He said possible factors could be the campaign Elections New Brunswick launched to encourage people to vote early to avoid election day lineups during a pandemic.

However, he noted the second day of advance voting falls on Tuesday — the day many parents are bringing their children back to school — and they may have preferred to cast an advance ballot on Saturday.

In addition, Saturday was a warm and clear day that made it easy to get out to the polls.

At dissolution, the Progressive Conservatives and Liberals each had 20 seats in the legislature, while the Greens and the People's Alliance each had three. There are two vacant seats and one Independent.

This report by The Canadian Press was first published Sept. 5, 2020.