OTTAWA — The Royal Canadian Navy is poised to enter a new era by taking possession of the first armed warship under the federal government's multibillion-dollar shipbuilding plan, and the first built for Arctic military operations in decades.
Jul 31, 2020 1:38 PM By: Canadian Press 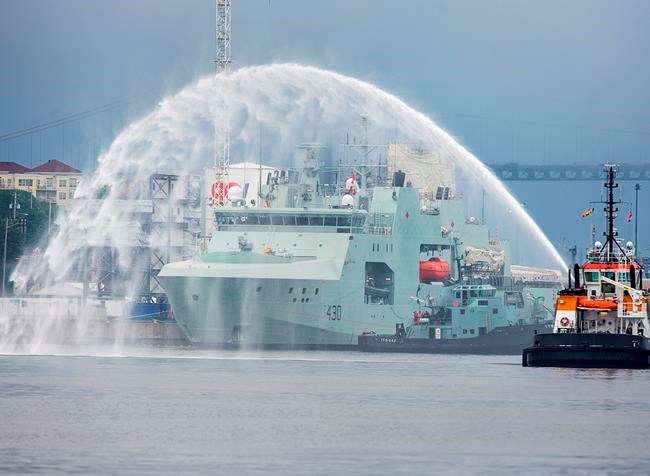 OTTAWA — The Royal Canadian Navy is poised to enter a new era by taking possession of the first armed warship under the federal government's multibillion-dollar shipbuilding plan, and the first built for Arctic military operations in decades.

Top navy officers marked the occasion along with representatives from Irving, which is slated to build five more such vessels for the navy and two for the Canadian Coast Guard in the next few years.

"These ships will be at the core of an enhanced Canadian Arctic presence, effectively complementing the capabilities of our other current and future warships through critical reconnaissance and surveillance operations," said Vice-Admiral Art McDonald, the commander of the navy, in a statement.

Harry DeWolf was a career navy officer who retired as chief of the naval staff in 1960. He rose to prominence as commander of HMCS Haida during the Second World War, known for daring tactical manoeuvres and sinking numerous enemy vessels, especially in the English Channel.

While the DeWolf's delivery is a major milestone for the federal government's shipbuilding plan — through which Ottawa is replacing nearly all of the large ships in the navy and coast guard — it wasn't easy coming.

Then-prime minister Stephen Harper first announced plans to build up to eight armed Arctic patrol vessels in July 2007 and Irving was selected in October 2011 to produce them before building replacements for the navy's frigates and destroyers.

But the following years saw several cost overruns and delays in the program.

After work started on the DeWolf in 2015, Irving said it would only be able to build five ships with the $3.1 billion budgeted for the project. The government ended up increasing the budget to $4.1 billion for six.

That money does not include the two ships for the coast guard, which are expected to cost about $400 million each.

Technical problems were also blamed for pushing the delivery date back several times. Then Irving closed its Halifax shipyard in March for several months because of COVID-19.

Despite those setbacks, University of Calgary professor Rob Huebert described the DeWolf's arrival as an "amazing step forward" for the Royal Canadian Navy. It's the first vessel specially built for military operations in the Arctic since the 1950s.

And it couldn't come at a better time, as more and more countries are starting to increase their interest — and military footprints — in the Far North, which is becoming easier to access due to climate change, said Huebert, who is an expert on Arctic policy.

"Even the most profound Arctic exceptionalist who says the Arctic is just peace, love and 'Kumbaya' will recognize there is a growing need to have at least a presence in the Arctic as it opens up and becomes a greater part of the geopolitical environment," he said.

"But once again, this is going to now give us a capability to operate that we haven't had since a short little period between 1956 to '57 with (HMCS) Labrador."

The Labrador was an icebreaker built for the navy but was in the fleet just a few years before being transferred to non-military use.

The navy was actually disdainful when Harper announced the new Arctic ships in 2007. Part of it was their slow speed and light armament, as the ships have only one small cannon. But mostly it was because the navy saw the Arctic as coast guard territory.

"Because they had not done this since '57, there was a little bit of: OK, what the hell do we do with these ships? We know what we need to do with NATO and in the Pacific. But this is going to sort of require us to scratch our head,'" Huebert said.

"Once the navy got comfortable and started realizing what it could do with it, that has subsequently changed."

The Royal Canadian Navy is only the latest naval force to join the fray in the Far North. Russia, the U.S., China and some European countries have been increasing their maritime capabilities in the region in recent years as part of a seemingly slow military buildup.

This report by The Canadian Press was first published July 31, 2020.

Next N.L. premier Furey a political newcomer but a familiar face in the province
Aug 3, 2020 7:22 PM
Comments
We welcome your feedback and encourage you to share your thoughts. We ask that you be respectful of others and their points of view, refrain from personal attacks and stay on topic. To learn about our commenting policies and how we moderate, please read our Community Guidelines.