STEPHENVILLE, N.L. — A safety report says the 2018 crash landing of a passenger aircraft at an airport in Newfoundland and Labrador was due to a loss of hydraulic fluid in the plane's front landing gear.
Jul 20, 2020 1:46 PM By: Canadian Press 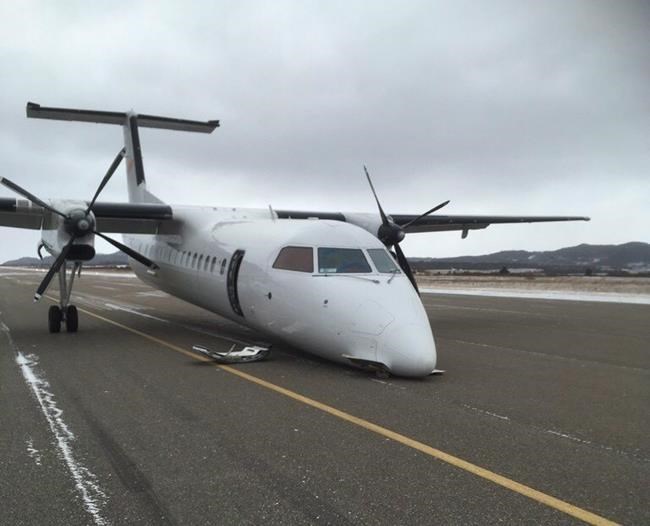 STEPHENVILLE, N.L. — A safety report says the 2018 crash landing of a passenger aircraft at an airport in Newfoundland and Labrador was due to a loss of hydraulic fluid in the plane's front landing gear.

In its report published today, the Transportation Safety Board of Canada also cited a maintenance error by the prior operator of the plane for the November 2018 incident involving the PAL Airlines Dash 8 flight at the Stephenville airport.

The report says the bearing installed in the landing gear's shock absorber wasn't large enough and this likely caused fluid to leak, preventing the landing equipment from fully extending.

Investigators say the front landing gear collapsed when the turbo-prop plane touched down, causing the aircraft's nose to hit the runway.

All 47 passengers and four crew exited the plane uninjured.

The safety board report concludes the aircraft's tires couldn't move because they became jammed against the plane.

"The reduced internal static pressure, combined with airflow encountered during landing gear extension, compressed the shock strut and allowed the tires to become jammed on the rear landing gear doors," the report says.

The incident began on Nov. 15, 2018, as the Bombardier DHC-8-315 aircraft was flying between Churchill Falls and Deer Lake.

Just before 11 a.m. local time, the flight crew prepared to descend into Deer Lake but discovered their indicators showing the landing gear wasn't fully extended, the report says. About one hour later, the crew requested to be diverted to Stephenville.

The airline also updated its standard operating procedures to include a formal checklist of items to be inspected when pilots conduct the exterior inspection of the Dash 8 aircraft.

This report by The Canadian Press was first published July 20, 2020.