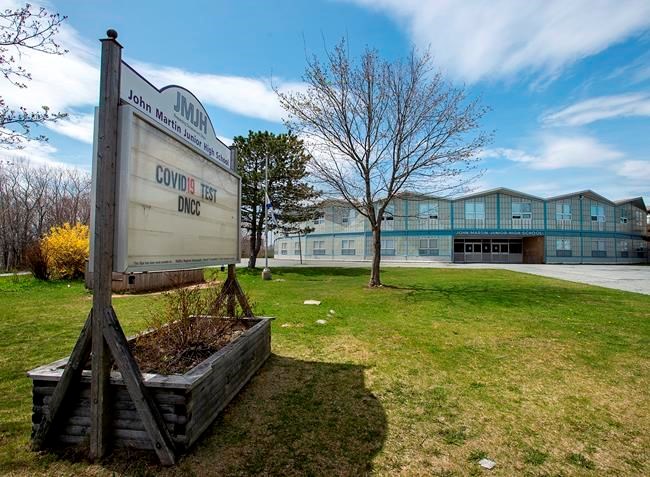 ST. JOHN'S, N.L. — Newfoundland and Labrador's education minister confirmed Friday that schools in the province will remain closed until September, the latest Atlantic province to take a cautious approach to the end of the school year during the pandemic.

Brian Warr said in-school instruction has been cancelled for the school year and the province is considering various scenarios for the fall, depending on the COVID-19 situation at the time.

Warr said parents and students in English and French school districts are encouraged to continue their studies with teachers through online tools, and report cards will be sent out the week of June 22.

The province has gone eight days without a new positive case of COVID-19, having confirmed 260 cases including 248 recoveries and three deaths.

Holly Edwards, whose son is completing Grade 6 in Paradise, N.L., said she wasn't surprised by the announcement, given the difficulty of social distancing in school.

She said she would support schools opening again in the fall, possibly rotating days with smaller class sizes to make distancing possible.

"To me, that is an important transition year to Grade 7 and another school so I hope this doesn't affect him when school starts in September," Edwards said by email.

Edwards said teachers and the school principal have been "excellent" at keeping in touch and following up about learning accommodations, though there have been challenges with keeping her son on track with "optional" work.

"I haven't found the online learning very easy as I am a single mom who is also trying to work from home while trying to get my son to complete some of the tasks his teacher sends," she said.

The provincial department said out of 4,000 students identified as needing laptops or tablets in the English School District, 2,500 have received devices, and more will be provided.

Premier Dwight Ball said money will be set aside to support students who have connectivity needs before the fall.

Nova Scotia has been hardest-hit among the Atlantic provinces at this stage of the pandemic, with 1,034 confirmed cases as of Friday.

The province announced four additional deaths from COVID-19 at the Northwood long-term care home in Halifax, for a total of 55 deaths in the province due to the illness.

Nova Scotia announced the loosening of some restrictions on Friday, introducing a "family bubble" policy allowing two immediate family households to come together without physical distancing.

"Connecting with family and friends is important for our mental health. For the last week we've seen low case numbers — your actions are helping to flatten the curve," said Dr. Robert Strang, chief medical officer of health.

Public beaches will be allowed to reopen as of Saturday at 8 a.m., along with outdoor activities like archery, horseback riding, golf, paddling, boating and tennis, provided social distancing and hygiene is maintained.

In New Brunswick, where 119 of 120 COVID-19 cases are now recovered, the government is spending $860,000 for technology to allow more students to learn online.

Prince Edward Island has also indicated that classes will not continue this school year, though some have reopened for students with individualized needs.

All 27 people on the Island who tested positive for COVID-19 have recovered, and the province is moving ahead to reopen some services sooner than originally planned.

Premier Dennis King said Friday phase three of the province's reopening plan will begin on June 1 rather than June 12, allowing gatherings of up to 15 people indoors and 20 outdoors as well as organized recreational activities, child care centres reopening and in-room dining.

Haley Zavo of Georgetown, P.E.I., said living in a small community has been beneficial for her children, aged seven and nine, with the teachers able to check in with distanced visits and even a parade by the students' driveways.

She's said she's been grateful for teachers' dedicated efforts, but the biggest challenge has been keeping track of material coming from teachers, who all have different approaches.

She said she'd like to a more guided, overarching strategy if classes continue online next year, and said it was surprising that there wasn't more of a "digital plan B" already in place.

"When things shut down, everybody kind of had to scramble to make it work, and I'm not really sure that that responsibility should fall on individual teachers," Zavo said.

This report by The Canadian Press was first published May 15, 2020.

Newfoundland and Labrador reports first positive COVID-19 case since May
Jul 10, 2020 11:59 AM
Comments
We welcome your feedback and encourage you to share your thoughts. We ask that you be respectful of others and their points of view, refrain from personal attacks and stay on topic. To learn about our commenting policies and how we moderate, please read our Community Guidelines.