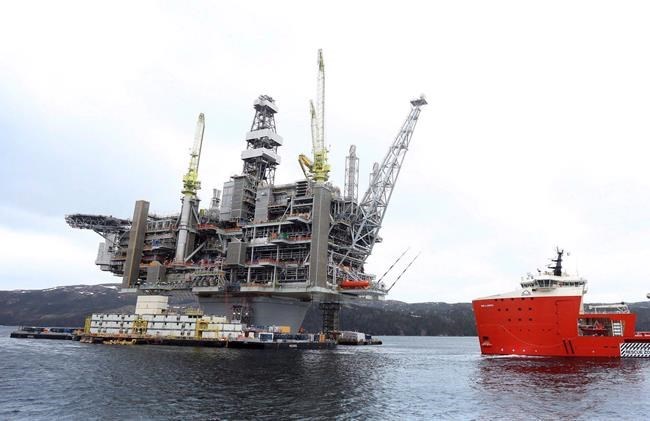 ST. JOHN'S, N.L. — A court challenge launched against the federal government this week argues that exploratory oil and gas drilling off Newfoundland and Labrador is being green-lit without proper assessment, setting a risky precedent for future projects across Canada.

The federal court application, filed May 11 on behalf of three environmental groups, seeks a judicial review quashing a regional study of exploratory drilling east of Newfoundland, arguing the work did not meet legal requirements.

It also seeks to stop the federal environment minister from using the study as the basis for regulation that would exempt similar exploratory projects in the region from evaluation of their potential environmental harms.

Lawyer James Gunvaldsen-Klaassen, whose firm Ecojustice is representing the group, said the proposed regulation "flies in the face" of the purpose of environmental scrutiny under the new act.

Gunvaldsen-Klaassen said the potential legal precedent could damage the effectiveness of the regional assessment mechanism that has promise as an environmental protection tool.

"It’s something that could be very good in terms of looking at the big picture and looking at things that are common to a whole region," he said. "But if it’s not done right, it can set a bad precedent and that’s what we’re worried about here."

In 2018, Newfoundland and Labrador's Liberal government announced an ambitious plan to double oil production by 2030, including a goal of 100 new exploration wells drilled offshore.

A committee formed last April was tasked by the federal environment minister to conduct an assessment of the proposed area for the offshore wells, which covers about 735,000 square kilometres of water off Newfoundland's east coast. The resulting report was filed in February and made public in March.

In their court application, the environmental groups argue the committee did not properly assess the effects of drilling in the area, including possible malfunctions, accidents, oil spills and blowouts, or the combined effects with other activity in the region.

They say the committee failed to conduct a regional assessment under the law, instead deferring outstanding elements of the work to the Canada-Newfoundland and Labrador Offshore Petroleum Board, which regulates the province's oil and gas activity.

The groups also argue the process was not conducted fairly due to the quick timeline. They argue they were not given sufficient time with materials to give feedback during the assessment process.

In a February letter to Wilkinson published with the report, the committee shared pride in the report but noted that "the abbreviated time" of under a year given to complete the assessment posed challenges.

"This not only limited the Committee’s ability in preparing the Report but also reduced public confidence in the Committee’s work and the opportunities for others to contribute," the letter read.

In the report, the committee also noted that the size of the study area was "one of the largest challenges" in the assessment process, "given the extent and the diverse and dynamic nature of this very large offshore environment."

In a March 4 discussion paper, federal Environment Minister Jonathan Wilkinson proposed a regulation based on the report's findings that would exclude proposed exploratory drilling projects from assessment requirements under the Impact Assessment Act.

"The objective of the proposed Ministerial regulation is to improve the efficiency of the assessment processes of offshore oil and gas exploratory drilling, while maintaining the high standards of environmental protection for these projects," Wilkinson wrote at the time.

In their court application, the groups argue this regulation should not be permitted to go ahead because it is based on an unlawful and flawed assessment, and would have "an immediate and irreversible impact."

"The approximately five projects currently awaiting or undergoing impact assessment would be able to proceed without being environmentally assessed under the Act, even though at least some are proposing to drill for oil in sensitive areas and marine refuges," the document reads.

The group indicated another application would be brought forward to challenge the proposed regulation if it comes into effect.

Wilkinson's office did not immediately respond to a request for comment.

This report by The Canadian Press was first published May 13, 2020.