FREDERICTON — New Brunswick MP Jenica Atwin announced Thursday she has left the Green party to join the Liberal caucus mainly because of ongoing internal rifts among the Greens over the Israeli-Palestinian conflict.
Jun 10, 2021 4:43 PM By: Canadian Press 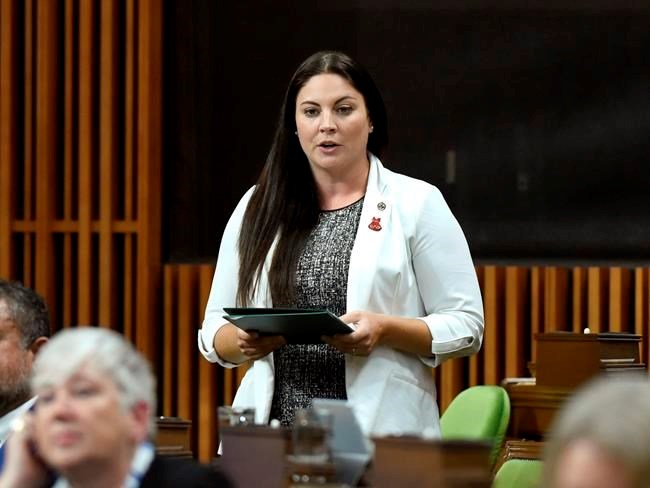 FREDERICTON — New Brunswick MP Jenica Atwin announced Thursday she has left the Green party to join the Liberal caucus mainly because of ongoing internal rifts among the Greens over the Israeli-Palestinian conflict.

"It's been really difficult to focus on the work that needs to be done on behalf of my constituents," she told a news conference in her Fredericton riding. "It certainly has played a role."

The defection leaves the Green party with just two lawmakers in the House of Commons.

Atwin made history in the October 2019 general election when she became the first Green MP to be elected east of British Columbia. But last month, she openly challenged Green Leader Annamie Paul’s position on the Israeli-Palestinian conflict.

On May 11, Atwin posted a message on Twitter saying a statement from Paul calling for de-escalation of the conflict was "totally inadequate."

"I stand with Palestine and condemn the unthinkable airstrikes in Gaza. End Apartheid!" Atwin wrote.

Three days later, Paul's senior adviser, Noah Zatzman, expressed solidarity with "Zionists" in a Facebook post that accused some unnamed Green MPs of antisemitism and discrimination. Paul had attempted to remain above the fray, saying party debate is healthy.

On Thursday, federal Intergovernmental Affairs Minister Dominic LeBlanc, also a New Brunswick MP, introduced Atwin as the newest member of the Liberal caucus. In her opening statement, Atwin said she had "been at a crossroads" for the past month.

The new Liberal said she had not been promised any particular role with the Liberals in exchange for crossing the floor. "We haven't discussed anything like that," said Atwin, a mother of two and a teacher who helped run an Indigenous education centre before entering politics.

The Greens' stance on environmental and social policy often aligns more closely with New Democrat positions, but the NDP electoral prospects in Atwin's riding of Fredericton appear bleak. The party won less than six per cent of the vote there in 2019.

Atwin's aisle-crossing is a small win for a Liberal party looking to tout its environmental credentials and shore up the ranks of its minority government. But the change deals a much bigger blow to a Green caucus already struggling to stay afloat.

David Coon, leader of the New Brunswick Greens, said he knew Atwin felt abandoned by Paul. "I am profoundly disappointed that she decided her only option was to cross the floor, after the voters of Fredericton and Oromocto had elected her as a Green, to be the kind of strong and independent voice in Ottawa that the Green party encourages," he said in a statement. "She will discover that her principles will not find a home with the Liberals."

When asked about her previous criticism of the Liberals over electoral reform and climate change, Atwin said: "If you looked at my voting record, my comments in the House of Commons, everything that I've said and done still stands .... To the voters, I would say, 'I'm still me.' "

LeBlanc said the Liberal party welcomes divergent opinions, even when it comes to Israel. "In the Liberal caucus, there is enormous room ... for differences of opinion," he said. "Our caucus discussions will be that much richer."

This report by The Canadian Press was first published June 10, 2021.

— With files from Michael MacDonald in Halifax